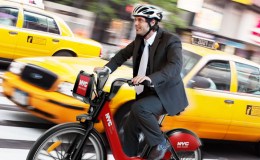 New York City’s system will dwarf Capital Bikeshare in Washington D.C. (also run by Alta Bicycle Share), which is currently the largest system in America with about 1,100 bicycles and 114 stations (Portland’s plan is to have about 740 bikes and 74 stations). Bike share in New York City is expected to be similar to D.C.’s system because they’ll use the same “Bixi” bikes (from Montreal) and the same vendor.

As they do for D.C.’s system, Alta will oversee New York City’s entire system, assisting in permitting, funding strategies, program management, kiosk design and location analysis, and more. As reported back in March, the NYC contract is thought to be valued at about $200 million.

Alta Bicycle Share is a spin-off of Alta Planning + Design, one of the leading bicycling and walking planning and project consultants in the country. The CEO of Alta is Mia Birk, former bicycle coordinator for the City of Portland Bureau of Transportation (she’s also author of the book, “Joyride”). Alta Bicycle Share currently has 17 employees at offices throughout the country. The company runs D.C.’s Capital Bikeshare, Boston’s new “Hubway” system, and Melbourne Bike Share in Australia.

The New York City contract catapults Alta Bicycle Share into the top spot of North American bike share vendors and it raises their profile leading up to forthcoming vendor decisions by cities like San Francisco and Portland. Alta Bicycle Share was one of two vendors who showed up at a recent bike share demonstration in Portland.

Similar to what Portland officials have proposed, the New York City system will not require any public subsidy; the system will be paid for entirely by private sponsorships. You can bet that the City of Portland is watching how things develop in New York City very closely as they prepare their own Request for Proposals due out in the coming weeks.

Alta is planning a celebration in the parking lot behind their Portland offices today (711 SE Grand Ave, River City Bicycles parking lot) from 12:00 to 2:00. The public is invited.

New York City Bike Share is expected to begin operations next summer. Check out the just-launched NYCityBikeShare.com for more information.

…And I said it was a crazy idea (capital intensive) two years ago. 😉

Bicycle industry = jobs creation? How will the Oregonlive commenters spin THAT negatively?

Also: Congrats Alta! Just don’t injure anyone with your tractors.

R. Sewell
How will the Oregonlive commenters spin THAT negatively?

I could feel slightly jealous or ashamed that we can’t get this here …
or
… I can wait until Bike Snob rips Alta Planning, and thus Portland by extension, for any number of amusing things that occur as a result of this contract.

Wow, that is awesome!! Congrats, Alta!

I had not heard that NYC was going to do this. It’s huge, and sounds like they’re going to have enough bikes and stations to really make an impact!

not to get nitpicky, but isn’t Alta Bike Share based in Philadelphia? Might be more appropriate to say, “Alta Bike Share, a subsidiary of Portland, OR based Alta Planning + Design.

Well done! Have there been reports on the metrics of the DC operation? Operating revenues, depreciation (bikes vandalized/stolen, replacement schedules, etc.)?

One interesting tidbit could be that once the bikes wear out, then they are donated to a charity for rehab, then given to disadvantaged people. It helps enable people who otherwise couldn’t get a bike, and has a back end effect of theft deterrence – no one will steal a bike that they can’t get for free. Of course this is jumping the gun, and bikes would probably be 5 years old or so, before they are replaced.

It might be bad idea – since these bikes are very specialized and generally try to not share parts with common bikes that can be serviced affordably at the corner shop. (That’s the plan at least.)

Perhaps the public contract can add a social service aspect to it – volunteer for system credits or work for job training. Many cities have public valet bike parking as a job training goal.

I love bikes, but I hope this doesn’t turn into a disaster. Can this work in a city that is mostly unsafe and hostile to bikes (and crawling with thieves)? We shall see. BTW I live in NYC for 8 years.

Do you still live there? My understanding is that both of those issues have been going away, that the bike vs. car war everyone was revving up for never really happened and that NYC is statistically just as safe, if not safer, than other similarly large urban centers.

Paris was the same way before Velib came along. It’s very different now.

How Portland Oregon’s Alta Bike share won the 10,000 bike share contract for NYC.
Well, they are using Quebec’s Bixi which are bankrolled by the municipal taxpayers of Montreal whilst the looser ( B-Cycle, a joint venture between Trek Bicycle, Crispin Porter + Bogusky advertising firm, and health insurance provider Humana) have to go to the real financial market. Sounds like they (B-Cycle) could appeal under the Free Trade Agreement over export subsidies.

Chris I
Reply to  Harry Musson

That will only take 6 years to process through the WTO…

Despite a flawed launch, staffing problems, and a failure to have all the promised bikes and stations installed still two months after launch, Alta’s system is beating ridership expectations in Boston and so far hasn’t hit any of the stumbling blocks predicted by critics. Alta doesn’t seem to learn from previous launches and mistakes starting out. But once the system is operating, the simple nature of it, creates enough momentum for everything to work out fine.

New York has such a high population density I can see the system working really well as long as there are enough stations to meet demand and connect major destinations.

Natalie
Do you still live there?.
Meant to type lived, I left in 1997. The buffered bike lanes and pedestrian plazas making all the news are mostly in Manhattan (some in Brooklyn too). That’s fine and dandy, but there’s much more to NYC than just one fancy borough. Queens, most of Brooklyn, Staten Island, the Bronx – they’re still ruled by the car. Let’s not forget that most beat cops, lower levels of city government, crazy drivers looking for parking, Hassids, developers, and road maintenance workers could care less about some enlightened guy on a bike. Yeah, it’s a tought town.