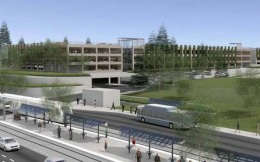 Love it or hate it, the Columbia River Crossing project is marching forward. Fast (in mega-project terms). Below is a run-down of recent developments and news tidbits…

Metro’s Leap of Faith
On June 9th, Metro voted 5-1 in favor of a CRC resolution (Councilor Carl Hosticka was the lone no vote). The vote was a nod to CRC project staff and state DOTs from Oregon and Washington that they had “addressed satisfactorily” a list of 11 issues with the current plan initially raised by Metro back in 2008.

According to citizen activist Rebecca Hamilton, a report by Metro showed that only five of the 11 issues were “fully addressed,” yet that didn’t stop them from passing the resolution. According to Hamilton, “The remaining six, which include major project concerns (such as the financing plan), were considered unresolved. In the polite project parlance, these issues are considered ‘on track, but requires additional actions/decisions.'”

Hamilton also reported that of the 40 citizens who testified, about 90% “urged Council to vote no on the resolution.”

Despite a lack of progress on key issues with the project and many unconvinced constituents, Metro councilors pushed through the CRC plan. One councilor, Barbara Roberts, had mixed feelings about the project, but described her vote as a “leap of faith”.

CRC’s Answers
In response to questions raised in recent news articles, CRC project staff released a new document on June 16th titled, “Recently Asked Questions.” Available only in PDF form, the document gives the official answer to 14 questions about the project. The questions include details on funding, oversight, whether or not they looked at alternative plans, urgency of the project, and so on.

$178 Million for Park-and-Rides
Remember when I reported last month that the CRC project would spend $60 million on three parking garages near downtown Vancouver to encourage suburban commuters to use light rail? My story was based on an estimate by economist Joe Cortright. Turns out he was wrong.

Wonky Details
Last week, CRC critic and transportation expert Chris Smith pointed out that citizen activist Jim Karlock filed a successful public information request to see the project’s Final Environmental Impact Statement (FEIS). Get the link to download it and read some discussion about it on PortlandTransport.com.

As the CRC lumbers through the process and continues to be supported by our regional elected officials, many questions remain. Is this project destined to happen? Will any regional leader step up (perhaps prodded by activists) to put the brakes on it? Stay tuned.

I for one am ready to sign a recall petition to remove these people from office.

178 million for PARKING GARAGES??? And we don’t have funds to build out the Bicycle Master Plan? Where are our priorities?

There is too much money involved to stop this “leap of faith” now. Sadly, this will only mean a significant decrease in livability for people living near either end of the crossing — particularly folks living in North Portland whose incomes contribute fewer dollars to the city’s tax revenues (and whom are therefore rendered voiceless and powerless to stop it).

“of the 40 citizens who testified, about 90% “urged Council to vote no on the resolution.”

One councilor, Barbara Roberts, had mixed feelings about the project, but described her vote as a “leap of faith”

Too bad she didn’t leap with the citizens who testified. If you’re going to leap, why not with those who elected you/who you represent?
Oh right, there’s money to be made here–lots of it. Keep the pressure up, folks!

really sad to see Rex Burkholder voting for this, but this was to be expected from Tom Hughes

I wonder if the vote would have gone the same way if David Bragdon had stuck around?

Last I saw, David was behind a plan to put solar panels on 2/3 of NYC rooftops.

“In New York, David Bragdon, director of the Mayor’s Office of Long-Term Planning and Sustainability, said the city could realistically add “thousands of megawatts” in solar power.”

Thanks for posting the information on the EIR! This has almost been impossible to find and i think it will be an excellent reference.

So looking south from Vancouver USA, you’ll see a massive concrete slab descending towards you flanked by parking garages.

Today I am both a little sadder and madder.

There are several things that could still kill this project. Vancouver will be voting on light rail operating funding. If they reject this, it will throw a major wrench into the plans. We also need to get federal funding, and the project is competing with several others. If the feds take a close look at the project, I think they will realize how poorly planned it is. The traffic projections are way off, and the cost effectiveness (congestion reduction per dollar spent) is low.

Anonymous (this time LOL)
Reply to  Chris I

I am struggling with my thoughts on how to vote on that ballot measure. Normally I’d vote yes to support transit – and I don’t want the CRC built without transit. But I don’t want the CRC (as planned) built at all and I definitely don’t want 3 huge parking garages and the street infrastructure to get cars too them wrecking my city. So I’m guessing my best move is to vote against light rail out of hopes of stopping the CRC entirely. Even a year of delay might be enough if we can keep congress from appropriating money for it. I don’t see federal funds for major highway projects getting easier to come by in the next few years.

The American Society of Civil Engineers (ASCE) has a very thorough report on the nation’s infrastructure which states that it is in need of over $1.1 trillion dollars to repair and upgrade. Half of that is for deficient roads and bridges. See:

If our society has not been able to afford to maintain our auto-based transportation system, it is absurd to expand it. You would think that Metro and their bedfellows at ODOT and WSDOT would accept that reality.

Simply because it is includes light rail and bike lanes, the CRC project is essentially about moving more automobiles. That is stupid. Building giant parking garages at the foot of the bridge is beyond stupid.

Mind you, that’s $176 million for the garages, not including the cost of buying the property on which to put them.

Nor…does the $176M cover operations and maintenance costs for the P+R structures.

The crazy thing (from a planning perspective) is that this same $176M could ‘buy’ a free transit pass for each of these drivers (1 driver = 1 space/ week day) for over 40 years…of their full employment lifetime. I think FTA allows retirement of similar FTA investments after 20 years…like the old Vancouver Bus Mall properties.

The P+R property cost might be lost in the noise…since the college might be willing to trade it for use of the P+R in the off hours, etc. (They are always ‘crying out’ that the State will not fund a parking structure for their parking demand.)

…Then there is the possible use by a new minor league baseball team – Yakima/ Vancouver Bears. Lots of balls in the air right now at this terminal area.

“This same $176M could ‘buy’ a free transit pass for each of these drivers (1 driver = 1 space/ week day) for over 40 years.”
Todd, nice point. And what’s worse is our collective ability to burn oil in our cars won’t last nearly that long. We’re going to be so sorry we ever thought of this dinosaur project before it’s even acquired a patina (if we don’t defeat it beforehand, that is).

$60,000 per space is crazy. I have a friend who was promoting fully automated, underground parking garages (as used in Tokyo), and he claimed their cost was only $20,000 per space, about the same as the usual price for an above-ground garage.

$50,000 normally will buy you underground parking, yet these are above-ground structures.

Unless they are including very high land acquisition costs, that price per space is way too high.

To break even, you would need to charge about 10% of the construction price per year (to account for opportunity/interest costs and depreciation as well as operating costs), which means a parking pass would have to cost $500 a month, or $25 a day, for the garages to make sense.

Instead of parking, how about we sell that land to private developers, making a profit, and let people buy condos or rent apartments in that space? You could build about 1000 homes in the same space as the garages, or even more with taller buildings.

One should never vote or agree to anything based on a “leap of faith”. I’m pissed off now. It’s time we took this seriously and took this thing down!!

The fact of the matter is (pure math) that the CRC will harm our health and lead directly to many deaths and injuries (sorry but is the reality of our auto-based transporation system). Bob Stites says “please no CRC”. Do we say to a criminal “please no”? Perhaps, but it is one of heck of a “leap of faith”. It might even be foolish.

The ‘Recently Asked Questions’ document reads like carefully constructed propaganda, with subjective and evasive language which shows their bias and builds their case by bypassing logic. Here’s a couple tidbits…

“2. How will we fund project construction?”

Basically tolls, local and federal money, they say. Then they add in their opinion which is largely if not entirely unrelated to the question:

“The improvements in the Columbia River Crossing project will benefit all people and the economy at the regional and national level, while increasing safety and travel reliability and predictability.”

“13. Are there other bridges that need our attention first?”

The answer should be ‘yes’, but it’s not. I like how they deftly avoid the fact that there are plenty of other bridges (including the Marquam which I-5 also uses) that are in worse shape.

“…The existing bridges (built in 1917 and 1958) are not seismically sound and could collapse or be rendered unusable by a major earthquake, regardless of how many other bridges are rated worse….” [Will a sparkly new bridge matter if everything else, including the Marquam, falls down?]

(Also, shouldn’t earthquakes be an argument for doing a cheap seismic update and then also building a secondary arterial bridge from Vancouver Hayden Island Portland?)

Ted Wheeler and the Oregon Treasury office estimate a $500 million hole in the finance plan: