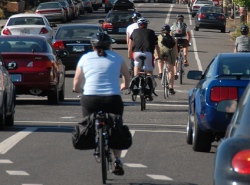 On Tuesday evening the Bicycle Transportation Alliance set up a “Recharge Station” on the corner of N. Williams Avenue and Tillamook. They offered free bike repair and other goodies while they asked folks to become members and get involved with local bike advocacy. They also took the opportunity to count the number of people that passed by on bicycles.

That’s a lot of bike traffic. While the BTA didn’t count the number of motor vehicles that came by, official traffic volume estimates by the City of Portland tell us that bicycles make up more than one-third of the total traffic volume on Williams.

According to a presentation given Tuesday night at the Williams Traffic Safety Operations Project Stakeholder Advisory Committee meeting, the peak hour traffic between Weidler and N. Cook consists of 1,920 motor vehicles and 920 bicycles. Bicycles make up 34% of the total traffic volume.

However, despite Williams being one of, if not the busiest bikeway in Portland, the street offers very little in the way of a high-quality biking experience. In fact, it’s such a hairy place to ride (door-zone bike lane, lots of fast-moving cars, cross traffic, and so on) that many people opt for adjacent streets. 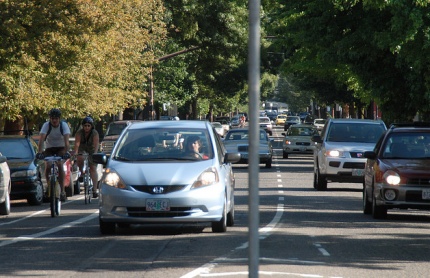 Despite high levels of bike traffic, Williams offers (in some segments) four full lanes for motor vehicles (two for travel, two for parking) and just one standard bike lane.

If bikeway access on Williams was improved to the level it should be, I’d be willing to bet that within one year, more than half of the peak hour traffic would be bicycles.

Thankfully, the City of Portland is working on this issue right now. There’s a very important open house on April 16th which will be the public’s first chance to officially weigh in on options being considered to improve the unbalanced mobility situation on Williams.

Learn more about the project on the City’s website, and stay tuned for more coverage of this important issue.

Cheers to the BTA for providing assistance. I rode by and saw their smiling faces.

My mistake on the percentage. I’ve changed it to 34%. Thanks for catching that.

Those are pretty impressive numbers. In 2010 we counted on a sunny August day at the intersection of Williams and Russell and counted 619 cyclists during that same 2-hour stretch.

Agree completely with the observation of this not being a high-quality biking experience. I turn right there at Tillamook so as to leave the street as soon as possible. Other trouble spots just in the short distance I travel it: folks turning from Broadway trying to beat oncoming traffic to the freeway entrance, and others right-hooking into the service station there.

Great photo and caption! “Despite high levels of bike traffic, Williams offers (in some segments) four full lanes for motor vehicles (two for travel, two for parking) and just one standard bike lane.”

I hope this helps answer the question “Why Williams?” for concerned folks.

I remember seeing a youtube video of the Mario Kart items on the bikelane on williams. I didnt know what they were on until my first experience on Williams. I was literally laughing out loud with joy.

The North Williams project (with the April 16th Open House Jonathan referred to above) now has a Facebook page, too. Stay up to date that way. Search for “North Williams Transportation.”

And yet the city doesn’t have any money to tow cars parked in the bike lane on Williams during Rose Quarter events? Seems like it should be a priority. More than ever!

Thanks for the info Michelle. The Facebook search should be “North Williams Alternatives”.

Thanks for the correction John. I meant “North Williams Traffic” on Facebook.

The bike service was provided by Metropolis Cycle Repair, for the BTA