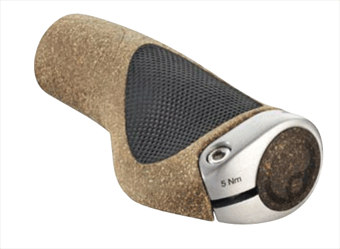 As a custom frame builder, I pay a lot of attention to the distances between the three primary contact points that a rider shares with their bicycle — their saddle, pedals, and grips. The millimeters in between guide my decision making from design to assembly. Component and accessory designer Ergon concerns itself, not only with where you connect to the bike but how your body interfaces with the bike in an effort to let you ride with maximum efficiency and comfort. Ergon, based outside Koblenz, Germany has been developing ergonomically designed handlebar grips and winning design awards for them since 2004.


“The cork provides a soft feel without being crumbly, slippery or mushy, even after lots of time in the rain.”

I’ve been using Ergon’s GP1 Biokork lock-on grips for three months and I’m very pleased with their style, performance and comfort*. I never gave lengthy consideration to grips (other than to wonder what good an embossed rubber logo does for the rider) and I was skeptical about these relatively large, oddly shaped handlebar grips for one main reason: I worked in a bike shop whose rental fleet used similarly shaped grips (by a different company) and the mushy rubber globs never stayed where I put them.

With this bias in mind, I broke into the Biokork’s recycled packaging and decided if the folks at Ergon make grips as solid as their display boxes, I’m in for a treat.

I chose to install the natural cork handles on my cargo bike, wondering if the swept back city bars would clash with Ergon’s intended use. They did not and with one minor rotational adjustment for optimal wrist position (see image) I was on my way. Immediately, I noticed they felt firm and supportive, but not awkwardly large. (The GP1 Biokork comes in 2 sizes and I tested the large ones.) The cork provides a soft feel without being crumbly, slippery or mushy, even after lots of time in the rain. Some darkening has occurred which doesn’t detract from their appearance and the aluminum lock-on has not budged from where I like it.

At around $40, these aren’t the cheapest grips on the market and the bling factor may not be as high as Brooks or Portland Design Works. However, Ergon’s mountain bike racing origins have driven them to excel at grip performance and, well, ergonomics. The result is a noticeable increase in comfort and control. This particular model utilizes sustainably harvested Portuguese cork, vegetable oil based rubber and a grass fiber compound inner core. Its inherent hypoallergenic quality isn’t much of a selling point for me but it’s nice to see companies working hard at thoughtful lifecycle production rather than just painting their stuff green.

The GP1 Biokorks are meant for a variety of handlebars with standard 22.2mm diameters and would make a fine upgrade, particularly for city or commuter bikes with swept or straight bars. The variety of handlebar grip designs available from Ergon is amazing, sixteen by my count, in three categories ranging in retail price from $30-$130.

It is worth noting that I also installed a set of Ergon GR2 grips from the same Performance-Comfort series on a customer’s bike and her response was an immediate and enthusiastic, “Wow!”. I will not be getting those back. I look forward to using Ergon products on future bike builds because the quality and design complement the ergonomic fit I strive to achieve with each frame.

You can find Ergon products at many local bicycle retailers. Ask to demo a bike with these installed and I think you will be convinced.

*Ergon provided this product at no cost and is a supporter of BikePortland.

I have older Ergon grips on my tourer, my commuter, and my MTB. I SWEAR by these things! Genius design, well-made, and I think they’ve really helped with numbness. I think a local Portland company makes something very similar, too, though. 😉

Are these compatible with bar ends? Looks like it.

If bar ends are your preference, check out their other models with integrated and independently adjustable bar ends such as the GC2, GC3, GR2 or any of their lightweight versions. Note that these can all be shortened to allow for twist shift style shifters.

just use 2 part epoxy to set grips on the bar where you want them. cork sealer (used in building fishing rods) hardens and prolongs the life of cork grips as well. you can even sand them a bit to soften them without sacrificing durability. this tip is for free… thanks.

oh… if you shorten your grips for twist style shifers do not forget to put the bushings back in place between the grip and shifter.

all the best, m

portugal is the worlds’ leading exporter of cork. cork trees are harvested every 3 to 5 years (depending on thickness of the bark/cork layer) and generations of growers rely on the same trees that have been in their family for literally hundreds of years. only the outer bark is harvested. sustainability is paramount for families that rely on income from cork production. most plantations are small and support very few workers. a much harder life than you or i have to live. please support them by buying quality cork!

Love my Ergons. I have the GP1 that isn’t cork (they didn’t have the cork in SM when I was getting them) – super comfortable and I really like how easy it is to adjust their position with the clamp bolt. The packaging is good, too.

These are great grips! Recently put them on our Bromptons (have to hacksaw about an inch or so so they fit on the bars). They are suppose to come out with more grips in the Biokork line soon which include different bar end handholds. Nice way to class up a bike!

I have Ergons on each of my three mountain bikes plus my commuter bike. All except my commuter have the integrated bar ends of varying size. They especially rock on my SS 29er. ‘Nuff said.

Will from the Westside

Any bike I own with flat/riser bars gets the Ergon treatment. I’m a deathgrip kind of guy so Ergon’s have helped to relieve the Ulnar Nerve pressure. I use a pair with the integrated composite bar ends for endurance mtb racing & singlespeed mtb…hands down (pun intended) the best.

They are now offering white grips in their more aggressive all mountain ones. But more color options would be legit. Give ESI foam grips a try too if you’re trying to save weight.

I just received a pair of the GC3-L (L being for large) and installed on my Trek Soho 3.0. Very easy install, too. Though, I haven’t tried them on my regular commuting trip, they feel sturdy, yet comfortable, and very stable. Unlike the stock Nebulus grips that came on the bike and would constantly rotate/twist during normal use, I can tell already that these things won’t be moving.