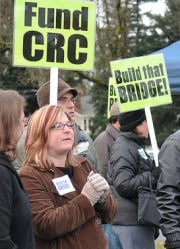 The event is being hosted by the Northeast Coalition of Neighborhoods, an umbrella non-profit that represents 12 neighborhoods in North and Northeast Portland. At tonight’s forum, residents will be able to share their opinion about the project with local leaders including Metro President Tom Hughes, Metro Councilor Rex Burkholder, and state representatives Tina Kotek, Lew Frederick and Chip Shields.

The CRC is a vast, multi-billion dollar highway widening project. It would include widening of I-5 and several new and wider interchanges and a new bridge over the Columbia River. The project has already cost well over $100 million just in planning costs and it has been dogged by controversy for several years.

However, just as the design was recently shot down by a panel of experts and governors of Washington and Oregon were told to go back to the drawing board, the project has managed to actually gain momentum thanks to some high-profile nods in recent weeks.

CRC backers rejoiced when President Obama announced he would set aside $400 million for the project in his budget proposal back in February. Then, just last week, Obama’s Transportation Secretary Ray LaHood also added his stamp of approval to the project, saying it stands as a “national model”.

At a hearing of the U.S. House of Representatives Transportation and Infrastructure Committee in Vancouver last month, much of the discussion was dominated by the CRC, with many key elected officials and much of the public showing their support of the project.

This unexpected federal attention helped give Oregon Governor John Kitzhaber the political breathing room to announce in a speech last week that he was ready to move forward on the CRC. “I’m glad to report we have an opportunity to get all project approvals this year,” said Kitzhaber, “complete engineering in 2012, and break ground in 2013.”

As official momentum seems to be on the project’s side, CRC critics are sharpening their arguments. Last week, two local transportation and public health activists made their voices heard in the opinion pages of The Oregonian. Mara Gross of Coalition for a Livable Future and Mel Rader from Upstream Public Health said now’s the time for Governor Kitzhaber not to move forward, but to “back away” from the “mega-project.” “His choice” they wrote, “– either an overpriced tribute to the 1950s or a strategic, targeted solution — will be our legacy.”

To share your thoughts on the CRC project, consider attending the public forum tonight at Concordia University’s Luther Hall (2811 NE Holman St., Room 121). If you can’t attend, CRC project staff are hosting a public “listening session” this Thursday from 12:00 to 2:00 pm at the Portland Expo Center (2060 N Marine Drive).

Oy Vay. Not to beat a dead horse, but the most aggravating thing about this project is the $100 million spent for the “planning costs” ($109 mil according to the Sunday Oregonian if I remember correctly) and yet apparently no real progress has been made.
I applaud Gov. Kitzhaber’s efforts to light a fire underneath the whole mess, but how will tonight’s forum be any different from all of the other, um, “discussions” that have taken place?

To my Portland Neighbors…please when discussing this project tonight…

…stress the immediate need for a new bike ped and transit crossing with the local arterial option – if they are successful in stopping the larger CRC project, then your work is just beginning.

Keep the baby, if you do not like the bathwater.

Something definitely needs to be done to improve this connection. Anyone who tells you otherwise hasn’t biked around or across those bridges (or has VERY low standards).

Acknowledging the need for improvements only strengthens the sting critical comments. You can’t be dismissed as a reactionary NIMBY who never crosses the river.

Please show up tonight and help kill the Zombie CRC. And if you want to make signs with zombies on them, that would be good, too.

Rep Kotek and Senator Chip Shields are supporting the CRC. Rex has been designing it for years and got the BTA on board.

“The question I get asked when we talk about this is, ‘When are we going to start building?’ Kotek

Headline, Front page Sat = Kitzhaber concrete on Bridge. “we have an opportunity to get all project approvals this year, complete engineering in 2012 and break ground in 2013”

I’d get arrested in a peaceful protest, but I’d be the only one. I can’t outspend millions in public outreach to contractors who’ve sold this bridge. 10 lanes at Jansen beach, 2 lanes at the Rose Quarter.

.. the preceived “need” does not exist?

this does not sound like a very informative forum. It sounds like it is going to be very one sided by the way the agenda is set up. Get someone from the governors’ office to represent the project and answer questions. Those are the people making the decisions not the local politicians.

The agenda is set because it is “common sense” that adding more lanes always helps and that the most important metric is how fast we can move automobiles through a low bandwifth pipe.
The people that know that this “common sense” is wrong are a minority and largely intellectual. To the majority with the aforementioned common sense these intellectuals are “froo-froo, hoity-toity, head-so-far-up-their-arse-that-it-is-in-the-clouds-too” who don’t know what’s goin` on in the real world that affect the workin` man.
Until something is worked out that convinces thse people that facts and faith are not interchangeable and the “logic” and “rationality” are not profanity we will constantly lose battles like this with the CRC.

Now that the CRC has momentum there is a significant risk of cost reductions gutting the bike and bike facilities. At this point I am urging the BTA to rejoin the design debate. We can’t afford to shoot the moon to stop the CRC and end up with really bad or non-existent facilities if it does get built.

Be Patriotic! Support our troops! Save Money! Reduce traffic 40% for free! Carpool twice a week.

i’m anxiously waiting to ride a new bridge to portland… it’s about time!