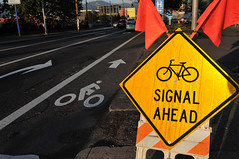 As we reported yesterday, PBOT’s Signals and Street Lighting Division Manager, Peter Koonce, was in Salem yesterday to testify in support of a bill (SB 130) that would give official state backing to bicycle traffic signals. (ODOT is behind the bill, PBOT is supporting it.)

Below is the text of his testimony (emphasis mine)…

Chair Beyer and members of the Committee. Thank you for the opportunity to appear before you this afternoon regarding Senate Bill 130. For the record, I am Peter Koonce, the Signal and Street Lighting Manager for the City of Portland’s Bureau of Transportation. 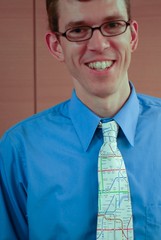 In Portland we have applied strategic solutions to address the conflicts between motorists and cyclists. Senate Bill 130, which adds green, amber and red bicycle traffic control devices, will codify a technique that we have used to remove confusion and improve the safety of our streets. Passage of this bill would allow for bike signals that are electrically powered traffic control devices that maybe used in combination with existing traffic signals. The signals direct bicycles to take specific actions and are used to address an identified safety or operational problem.

Providing an exclusive signal display recognizes the differences between motor vehicles, bicycles and pedestrians, and it separates bicycles from conflicting movements. The intent of the bicycle signal head is to clarify who is intended to move and when in order to avoid unsafe interactions between cyclists and motorists. Increasing the predicable movements of all roadway users increases safety of all modes. A bicycle signal head is simply a tool that intuitively communicates to roadway users—especially people on bicycles—not only when they are to move through an intersection but also who is to move through an intersection. Additionally, this device allows our partners in the traffic divisions of police departments to cite infractions that result from failing to obey the signal.

Portland has used bicycle signal heads under a variety of conditions. For example: 1) where the intersection of a roadway and a path is not at a right angle the bicycle signal reduces conflict, and 2) at complicated intersections where providing cyclists their own phase is necessary to stop conflicting motor vehicle traffic. For example, one important application helps reduce the potential for right hook crashes. This occurs when both motorists and cyclists have a green phase. The motorist turns right, not seeing that a cyclist on their right is proceeding straight through the intersection during the green light. At intersections where this is especially problematic providing separate phases for motor vehicles and bicycles help avoid this dangerous conflict. In Portland, those situations include intersections with dual right-turn lanes, and where there is limited sight distance between motorists and cyclists.

The bicycle signal head is intuitive, unambiguous, and distinct from pedestrian displays. Providing separate signals for cyclists is similar to the ubiquitous walking pedestrian/hand signal. The use of an iconic bicycle allows motorists and cyclists to immediately identify the information being communicated, which is who has the right-of-way and when.

The need for additional devices to communicate to motorists and cyclists is clear. This solution has been applied in many European cites, has been a standard since 2005 in California and we have found great success in the six (6) intersections where we have used this tool on our City streets. The Oregon Department of Transportation is currently showing a bicycle signal head in its plans for an intersection in Ashland, and the City of Eugene is contemplating using one at one of their intersections.

Additionally, this device allows our partners in the traffic divisions of police departments to cite infractions that result for failing to obey the signal.

The City of Portland supports the Oregon Transportation Commission’s submission of SB 130 and will partner in any way necessary to advance the clear communication with our system users about how to effectively and safely share the road.