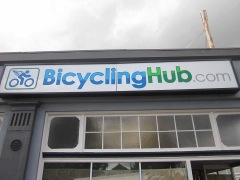 Local bike businesses are moving, expanding, and celebrating. Check the updates below…

In addition to their online presence, BicyclingHub will have an expanded retail area at their new location. Situated near the corner of SE 7th and Sandy Blvd, they should get a healthy amount of bike-in traffic. BicyclingHub.com sells a range of clothing — from big brands Castelli, Pearl Izumi, and Showers Pass to hard to find and specialty items. Learn more at BicyclingHub.com.

WTF Bikes Celebrates One Year Anniversary
What started as one repair stand in front of the defunct Free Store project at SE Clay and 11th, has become the home of a successful bike shop. Tom Daly’s WTF Bikes (Well Tuned and Fast) will celebrate one year in business this Tuesday (10/26). Even after thieves hit his shop just before it opened last year, Daly has managed to survive and thrive in the high-traffic location right on the Clay Street Green Street/Bike Boulevard.

To say thanks to the community, Tom is having a big party tomorrow night. Show up at SE 11th and Clay for live music and fun starting at 7:30 pm. Check WTFBikes.net for more info. 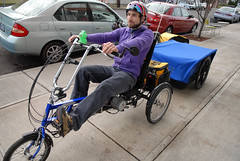 SoupCycle Makes 20,000th Delivery By Bike
SoupCycle, the local business founded in 2008 that pedals tasty soups to hundreds of “soupscribers” all over Portland, is celebrating a major milestone. Founder Jed Lazar says they’ve delivered 20,000 servings of soup by bike and they’ve saved 6,600 car miles in the process (they’ve also funneled $45,000 to local farmers!).

Their delivery area (called “Souplandistan”) now stretches from NW 23rd to SE 53rd and from SE Holgate to N Ainsworth.

B-Line and Whole Foods Team Up for Turkey Delivery
Focusing on that “last mile” of holiday turkey delivery, Whole Foods Market in the Laurelhurst neighborhood (2825 E. Burnside) has teamed up with B-Line Sustainable Urban Delivery.

Instead of their usual practice of storing turkeys in a diesel-powered trailer, Whole Foods will store the birds at B-Line’s inner Southeast warehouse. When orders are placed, turkeys are pedaled over to the store on one of B-Line’s electric-assist cargo trikes.

— From framebuilders to bike shops, read more bike business news in our archives.

I think a bigger story that got missed here is B-line’s new B-share program, funneling unused food to those in need.

It’s too bad WTF bikes spams craigslist in a private party (non dealer) section. They don’t get my business.

Yay for WTF bikes! It was a rocky start with thieves and all – so glad that you have made it this far. Best bike repair shop in town- fast and affordable service.

As soon as CL gets a ‘for sale by dealer’ section for bicycles like they have for furniture, I will be happy to sell my stuff there. I’m really just one dude, and sometimes i need to sell stuff on craigslist. Come by the shop, have a beer with me, lets talk more about this.

I’m offended that Soupcycle doesn’t deliver to our neighborhood. What do they think, that the Geographical Hipness Threshold ends at 52nd?? Everyone knows that 82nd is the true boundary! 😉 (Kidding, of course.) At any rate, I do hope they expand soon as the cold weather approaches.