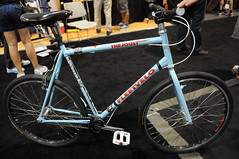 The Joust is a new bike from the Fleetvelo brand for those who are serious about bike polo. For Richard Schwinn — the founder of Waterford Precision Bicycles, father of Joust designer Tucker Schwinn, and great-grandson of the legendary Ignaz Schwinn — the bike is not just a tool for polo, it’s a symbol of the potential bike polo has to transform America. But before I get into that, here’s what makes the Joust such a great polo bike.

“I’m convinced that polo will be a huge growing market. It’s a great urban sport… It’s the first sport you can do with bikes that could be as ubiquitous as basketball.”
— Richard Schwinn, Waterford Precision Cycles

The geometry has been dialed in specifically for bike polo by Tucker himself, a guy who we’re told eats, sleeps and breathes bike polo. Based on a 26-inch wheel platform, the Joust has a high bottom bracket to prevent pedal strike and a short chainstay for snappy handling. The Hammer Schmidt crank offers two-speed internal shifting with the triggers on the left (so you can swing the mallet with your right hand). Another cool feature of the Joust is the 135 mm hub spacing front and rear, which allows you to use a rear wheel on the front. This means you can have four different cog options (including fixed if you want) at any one time. For the polo player who travels, you can upgrade to S & S Couplers which allow the bike to break down and fit easily into a box for shipping. The Joust is made out of TrueTemper OX Platinum steel and it retails for $750 frame/fork and (the S & S Couplers is are a $600 upgrade and the 2-speed cranks are an extra $100).

I asked Richard Schwinn why he wanted to make a production bike for bike polo — which isn’t exactly a market that the industry is chasing in a big way right now. His answer surprised me.

“I’m convinced that polo will be a huge growing market. It’s a great urban sport. It’s the first sport you can do with bikes that could be as ubiquitous as basketball. The real possibility is a monumental shift of bike polo becoming a sport for kids. I see this as a potentially transformational thing for America.”

Richard’s point was that polo bikes are perfect for kids because of their versatility and the fact you can play pretty much anywhere. “You can commute on them [the Joust has rack braze-ons] do tricks, and play polo.”

I know bike polo is becoming more and more popular in the U.S. all the time, but I never thought of it really catching on as the next big youth sport. I like the way Richard thinks. I wonder if we can get kids playing bike polo as part of the Safe Routes to Schools curriculum…

Maybe Richard would be willing to donate a couple of these bikes to schools and see what develops.

my guess is hipsters will ride them down to the plaid pantry for beer.

I was there for the beginning of the most recent style of bike polo being played and now I’ve officially seen it jump the shark. Your polo bike used to be the bike you didn’t mind breaking because it really wasn’t worth much, now you can buy one brand new.

Add a basket for carrying PBR and you’ve got the new hipster bike of choice.

If y’all haven’t seen in your area, hipsters are running rampant on just about every bicycle there is. If you don’t much about bike polo its been an organized community for five plus years, with the last 2.5 years being organized through an internet community. Cities globally have spiked from 100 to 250 in the past year and is still growing daily. Not many niche sports see that spike in participation in one year, let alone any cycling sport. To say this is a hipster only sport ( or bike) is an igrnorant and misinformed statement. Just ask most of the ex-military and Navy seals that play in the portland/Seattle area; i’m sure they would grace you with a proper rebuttle.

I tried polo and it was a blast! I see the appeal and I’d be a regular if it was near me.

Thanks for covering the Fleetvelo Joust! Tucker has really put a ton of work into this frame in the past few years and it is great to see it all paying off for him.

Also, Actual Polo Player(#7) is correct – Bike Polo has transcended all of the stereotypes that have been stated by the previous ill informed posters. By taking what we do very seriously and establishing partnerships with local/state agencies as well as businesses, it is(has) rocketed past a “hipster sport” and is never looking back.

Expect to see more excellence in the future from Bike Polo!

Bike polo IS a lot of fun. Though it’s kind of a bummer when I miss the ball and my mallet whacks a hipster in the shin or knee. It looks like it hurts something fierce!