Two crashes involving bicycles have come across my desk in the past few days. People involved in both the crashes have asked for the public’s help in tracking down the suspects. 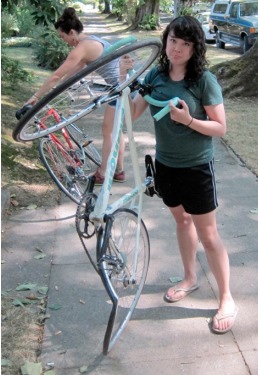 Luckily, she wasn’t riding the bike when the person ran into it.

The first one happened Friday night on the corner of SE Hawthorne and 49th. Portlander Matt B. and his girlfriend (in photo above) had parked their bikes out the Tanker Bar and had just walked away from them when the collision occurred. Matt says, “A pickup truck came around the corner, fishtailed, ran into the bikes, backed up and took off.” Fortunately no one was hurt. They’ve filed a police report and are on the look out for a 1960s-70s pickup with a red body and a white hood top. Matt also posted some images and a call for help on Craigslist. If you saw this incident and/or have information about the truck, call (503) 823-4800 and leave a message for Officer Joseph Cook or call Matt at (702) 523-9335.

I was also contacted by a local law office looking for witnesses to a crash that occurred on July 20th. Here are the details (emphasis mine):

“Our client was riding his bicycle near the intersection of NW 25th & NW Vaughan, when he was struck by a driver who was talking on her cell phone, and she was not aware that she hit him. Apparently, she dragged him a few feet after hitting him. She took him to Legacy Good Samaritan and his bike was stolen while he was treating at the hospital. She was driving an Acura SUV. Unfortunately, nobody called the police, so there was no police report made. If anybody in the community witnessed this accident, please call Emily at (503) 222-6333.”

If you have information on either of these incidents, please call the numbers above.

Man, getting your bike stolen after being hit really does add insult to injury.

so exactly which part is white? the hood, roof, or a bed topper?

Legacy Good Samaritan doesn’t have video footage from that long ago?

If she took him to the hospital is that considered a ‘hit and run’?

Spiffy, roger that. If a hospital visit is needed, call EMT to make a visit to the scene. Otherwise, PoPo will not fill out an accident report – at all. I was told as much by the police department when I attempted to make a post-accident report a couple of years ago. Without $$$ of damage or a person needing an ambulance, they just won’t file a report.

I realize it sounds biased, but:

In my experience, the majority of near-collision I’ve had on my bike have been with SUV drivers and/or people talking on their phones.

Considering that talking on the phone while driving is now a primary offense, why is there not more enforcement/education about this? Are people unaware that it’s a ticketable offense, or do they just not care?

Was she parking her bike parallel to the staple rack? My guess is the truck smashed her frame into the staple whereas parking perpendicular with the front wheel curbside would have only damaged her wheel.

Randall (#5): Here in California CHP is running cell phone sting days. Their schedule has been widely publicized on the news…

My mistake, they were locked up to a no parking sign. Here’s the link to craigslist:http://portland.craigslist.org/clc/bik/1900993007.html

I would check local bars to see if any drunks wandered out that night or if someone knows who drives the pickup.

Grr. Anyone know if Robocop will respond to phone-in reports of cell-drivers? Double Grr.

I don’t know who did the craigslist post but the original lvfixed.com post and the pdxfixed.com post describe the truck as being a 60’s American pickup red with a white roof. From the pictures I’ve seen the bikes were locked to a signpost, not a staple. Also the bikes were a Cinelli Vigorelli MASH edition and a Bianchi Pista Concept, both of them are a total loss, so this is somewhere around $3000 in property damage.

Man, that sucks (both stories). I have always worried about that type of thing happening when locking my bike right next to the street. Imagine if a drunk driver took out an entire row of those on-street staple racks that all over town now…

To call in you need the license plate, a good description of the car, and the location and direction of travel.

I guess you could call in a cell driver and say that s/he was “driving like a drunk driver”… true if somewhat misleading.

“if any drunks wandered out that night”- that happens daily in that neighborhood. so ride/park with caution.

especially while chained to a street pole…

I can’t understand why people park their bikes on Hawthorne. Harrison is just a few blocks aways and it would be less stressful for everyone if cyclists parked their bikes there.

I can’t understand why people park their cars on Hawthorne. Harrison is just a few blocks aways and it would be less stressful for everyone if drivers parked their cars there.

“In my experience, the majority of near-collision I’ve had on my bike have been with SUV drivers and/or people talking on their phones. ”

this may sound biased also, but most of the times that a cyclist has almost hit me (as a pedestrian) is when they are talking on the phone or looking for a song on their ipod. Also seems to be about 80% fixies.

Having almost been hit by a cyclist (who was talking on his phone) while on my cycle, I can totally understand that.

I nominate spare wheel for post of the week. Salmon is only 3 blocks away too.

“I can’t understand why people park their bikes on Hawthorne. Harrison is just a few blocks aways and it would be less stressful for everyone if cyclists parked their bikes there.”

July 20th was a Tuesday. I bet both these hit and run drivers live within a mile of the crime.

The cops were little help when I was the victim of a hit and run. I found my criminal based on the proximity assumption.

I got hit on my bike going to work back in 1986 in Chicago. The woman gave me false info and took off. I had her license plates but they were from Texas, and the Chicago Cops were little help.

Solution: I found her and got the cops involved. Every day I’d take a different winding bike route to/from work in nearby side streets. My guess was that she lived nearby, and I was right. Her car was red, and spotted in 7 days of commuting.

I wish the victims here would go to google images and post a URL of a similar vehicle.