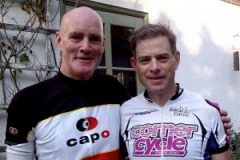 The day before Thanksgiving 2009 changed Jack Toland’s life forever. Toland has raced and ridden in and around Portland for over 40 years — much of it without a serious crash. But on November 25th, his lucky streak ended. Toland hooked a wheel of the rider in front of him and fell while riding with a group of friends near West Linn. The crash left Toland with multiple fractures of his left elbow and a broken femur. He spent nearly a month in the hospital and underwent several long surgeries.

The crash was especially tough on Toland because he did not have health insurance (he had lost his job prior to the crash) and the medical bills were as daunting as his outlook for recovery. Thankfully, Toland has many friends in the bike racing community. When he went down and the bills piled up, his friends came together to help him raise money.

But they soon realized Jack wasn’t the only one in this all too familiar predicament and now they’ve incorporated a new non-profit named “Friends of Jack,” whose mission is to help raise money for people who have a serious crash while bicycling and lack adequate insurance coverage.

“As tragic as Jack’s story may be, we’ve probably all heard several stories like it… We all know how precious and fragile life can be and how quickly it can change. One day you are on your bike and totally in control. The next moment, you are recovering from serious injuries and wondering how you are going to make ends meet. It can happen to any of us. That is why it is incumbent upon those of us with the means to help our cycling friends that may have come into difficult times.”

On August 28th Friends of Jack is holding the first of what will become an annual benefit ride, the Amici di Giacomo (Friends of Jack). The 30-mile ride will be held in White Salmon, Washington and will traverse through the scenic Columbia River Gorge.

This year, the Amici di Giacomo will benefit Jack Toland, but next year the money will go to someone else (or perhaps be spread among several people in need). You can learn more about the ride and how to contribute at FriendsofJack.org.

This is great to see helping out fellow riders. we all go thru life changes and it
has happened to me before.

So sorry to hear about your accident Jack. You are a great racer and have inspired so many others–including me–to start racing. I hope to see you at the “Fondo di Giacomo”!

It’s great that this is being done.
It’s sad that it has to be done.

i’d only add that i continue to hope that something like this will eventually expand into an entity that provides full-on universal health care for bikers. there’s gotta be a way to do it. eventually, it’d become a model where non-bikers could join, etc. most of us could get insured if we removed the middlemen — that’s the ultimate goal.

#4
I decided that my rant on US not having universal health care only taints the sentiment.
Plus my average rant length will give Vance a run for his money.

No one wants that:)

+1 on the universal health care rant.

Does this cover all cyclists or just ones operating legally? I’d hate to give to this and then find out my money was used to patch up some idiot riding against traffic or on a sidewalk.

#8
This ties back in to my no mandatory cyclist licensing/voluntary licensing by insurance companies rant.
I suspect that the default perspective of the auto insurance industry is that if a cyclist was involved they don’t have to pay out damages because the cyclist was most likely at fault and it will be difficult to prove that the auto driver is at fault.
My theory is that if there was some standard of cyclist training cyclist training we could point to, that the auto and health insurance industries agree is valid, and say “SEE, I learned how to cycle correctly and am not a F#$^#ing idiot, STOP TREATING ME THAT WAY!”
/rant

I was in Jack’s position in 2007 — uninsured, hit by a car, out of work for a year as a result. I’d love to get involved, but the website has no contact information. If anyone on the Board of Friends of Jack reads my comment, please respond with a means to contact your new non-profit.

It’s something that our webmaster needs to work on. The website just went live a few days ago.

Jonathan, maybe you can send her ( and others) my e-mail if they need assistance?

#9: I’d be down with bicycle driver licensing. Might cut down the number of near misses I get when I’m on foot on the sidewalk. Salem got to be so bad that I’d just shove them into the street if they were on the sidewalk…people learn quickly when you do that.

Funny how folks have money for race entry fee’s, OBRA License, Beer and new bike parts but not for insurance. I’ll bet the cable, cell phone and other utilities were on! Catastrophic Insurance is like what $30 a month?

My dear friend Jack had a job and insurance but unfortunate turn of events caused him to loose both. He was unable to get insurance on his wife’s plan. I have watched his suffering and it has brought me to tears at his unfortunate accident and I don’t wish this upon anyone.

You (#14) may be the most responsible cyclist out there but you never know when your suffering will be waiting for you. And it’s not funny how folks have money for the things they enjoy in life because I am very certain I could pick apart your perfect life of the things you could do with out so that I as a taxpayer don’t have to pay for your misguided efforts.

I proudly sit on the board of directors for the Friends of Jack and I say that because the others that are thinking about ALL cyclists are working out of the compassion of their hearts . We hope that you never have to suffer like our buddy Jack but if you do and you need help remember our organization, Friends of Jack. As Jack would say, “stay thirsty my friends”.

P.S.-Jack doesn’t have a cell phone or an OBRA License, and drinks very little beer. Please, next time be more specific on which companies offer catastrophic insuracne for “like $30” that will pay for over $100,000 in medical bills because the readers on this forum may find it useful.

Many thanks, Shellypants for your response.

We have a group of folks who are going to help out complete strangers in the years to come. Universal health care would be ideal, but until then we are holding bake sales, car washes, and benefit bike rides for those that need help.