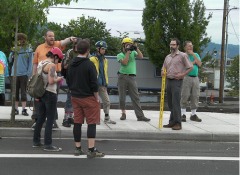 [Publisher’s note: The ride report below came in as part of our ongoing coverage of Pedalpalooza 2010. I thought it was so informative that I decided to put in on the Front Page. The ride was led by volunteer members of Active Right of Way (AROW), a grassroots transportation activism group that began with a “conversation” back in January. Their tagline is “Take control of your streets.” On Monday night’s ride, they stopped at several locations around town to discuss problems and solutions as well as share contact information of people in positions of influence.

Special thanks to AROW volunteer Steve Bozzone (who also does the Intersection 911 blog) for taking photos and writing this report.]

About 20 people participated in the AROW ‘Transport Your Activism‘ ride on Monday. The ride was participatory and at each stop we shared our collective knowledge about the problems, possible solutions, and what might be holding up necessary improvements. 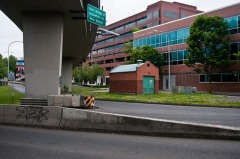 This is what people see when coming
to Naito Blvd from Waterfront Park.
(Photo: Steve Bozzone)

Our first stop was the Naito Gap, a major barrier to mobility for people walking, skating and cycling. Because of a funding gap in the original Naito Highway Reconstruction Project, completed in 2007, this section of road abandons active road users with no bike lane between NW Davis and NW Glisan Streets (under Steel Bridge overpass). This section also features 1100 ft between safe, legal crossings for those on foot.

Proposals for fixes to this section of roadway go back as far as 2007, yet halfway through 2010 we are still without an implemented solution. There used to be a pedestrian-only crossing above Naito Parkway that was accessible from the Steel Bridge staircase, but the city took it down during the light rail construction on the Steel Bridge, due to concerns about crime on the pathway. The City of Portland also planted the ‘No Trespassing’ sign across the street.

A proposal put forward in 2009 included removal of a southbound travel lane, pedestrian refuges, and user-activated crossing beacons. One of the challenges of this section of roadway is the proximity to a major rail crossing.

A revised plan, which will better connect Waterfront Park with the new NW Flanders bike boulevard, is currently 30% in development and construction is expected to begin in early 2011. (For more information, contact Project Manager Rich Newlands at (503) 823-7780 or Rich.Newlands@portlandoregon.gov)

Next, we traveled along the Portland Transit Mall, reflecting on the access Single Occupancy Vehicles enjoy on an otherwise dedicated major transit-way. 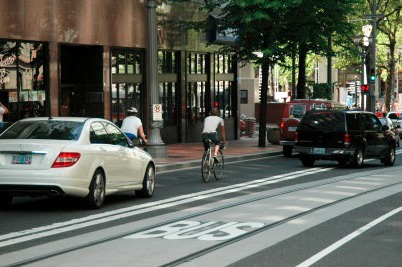 Why are cars allowed on the downtown “transit mall”? Anyone?
(Photo: Dan Liu)

We then arrived at Director Park, Portland’s newest urban oasis that features major improvements to the surrounding roadways, namely the lack of curbs and smooth transition from street to park. The intent seems to better connect the surrounding properties to the park, but we also wondered why the city does not take the bold step of completely pedestrianizing these park block streets, perhaps limiting vehicular access to local deliveries only. (Contact Susan D. Keil, Director of PBOT, Director@pdxtrans.org, 503-823-5185, and Mayor Sam Adams, Transportation Commisioner, 503-823-4120, samadams@ci.portland.or.us)

Our third stop brought us to the new Eastside Burnside/Couch Couplet project. 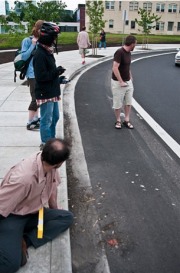 Standing in the bike lane on Couch.
(Photo: Steve Bozzone)

We discussed at length the engineering problems with the new Couch onramp (which PBOT has acknowledged as well). Specifically, the pitch and slope of this type of curved roadway is not correct, and there is concern about the travel lane widths that are insufficient for large vehicles.

We discussed a variety of possible solutions to fix this, most of which focused on separating bicycle traffic from cars, either by implementing barriers on the existing roadway or widening the sidewalks and diverting bicycle traffic onto the sidewalk. We also lamented the missed opportunity of a 2-way cycletrack now possible due to the major road diet on East Burnside. (Contact Chris Armes, PBOT Project Manager, 503.823.7051 or Chris.Armes@pdxtrans.org and Katja Dillman, Mayor’s Transportation Policy Advisor, katja.dillmann@ci.portland.or.cs, phone 503.823.1125)

Finally, we made our way up Grand Street to see the new streetcar tracks, arriving at the Failing Street Pedestrian Bridge over I-5. Joe Rowe led a discussion about the proposed Columbia River Crossing through the context of congestion further down I-5, and along parallel arterial streets throughout Portland neighborhoods. From the Failing Street bridge, we could see where I-5 narrows to 2 lanes, making expansion of the highway over the Columbia River seem counter intuitive.

We also discussed the ramifications in Vancouver, the lack of interest in this issue by Oregon Senators and Representatives, the painting of opposition to the bridge as “job-killers”, and real solutions to the congestion issues facing the crossing. Joe pointed out how outside of select times during rush hour, I-5 does not operate at capacity. (Contact sheet for Oregon House and Senate reps here: http://ow.ly/226VN)

Throughout the ride we made use of a radar gun to measure vehicle speeds at different locations. We also utilized a road width measuring tool to discover the widths of bike lanes and other travel lanes throughout the city. The use of the Neighborhood Safety & Livability Hotline was advocated as a great way to hold the city accountable while getting on-the-ground improvements in your neighborhood – several of us shared great successes by using this hotline: (503) 823 – SAFE.

AROW is looking at making this ride a regular event after Pedalpalooza. Please contact info@activerightofway.org if you are interested in presenting a location where change is needed on a future ride. Keep in touch with AROW on our website or via Twitter.

View photo galleries of this ride here and here.

— This report was written by Steve Bozzone.

The city redesigned the transit mall to accomodate some car access. There were complaints about the lack of vehicle access. The city made it abundantly clear from the beginning that the intent was to allow a modicum of somv transport on these two streets. So asking the question NOW, way way after the fact, seems disingenious. Not that I’m a fan of the way it turned out…..

The Transit Mall was made accessible to private vehicles as a result of lobbying by the Portland Business Alliance, end of story.

These AROW folks have the potential to really shame and embarrass the planners and engineers at PBOT, they should keep up the good work!

Cars (and bikes) are on the transit mall because allowing a mix of modes benefits the health of businesses, and by extension, the health of downtown. It is a good thing.

Best to have a lane or two for the confused, car addicted Vancouverites visiting our fair city. Them folks got guns!

Kudos for AROW for getting people involved in identifying – and considering solutions to – these trouble spots! For anyone wanting to pursue these beyond a one-shot event, I suggest enrolling in PSU’s Traffic and Transportation Class; applications are now open for full scholarships for the Fall term. This 10-wk course provides a wealth of information on transportation policies, funding, and priorities, with speakers from local, regional, and state agencies, as well as advocacy organizations. The really cool part is that participants get to develop their solutions to problems such as these – and many of them have been adopted by the City. For more information, see http://www.portlandonline.com/transportation/index.cfm?c=35727&amp;

@RynoDan — I respectfully disagree. Accepting something because “what’s done is done” is not a tenet of social movement building. We need the courage to look at all of our infrastructure in our neighborhoods and ask some tough questions, even if the paint is dry and the concrete poured. As mentioned, the original concept of the transit mall was to be CAR-FREE, so thanks to the PBA we have a great transit mall that is juxtaposed by easy access to SOV’s. I find this context quite telling of Portland’s approach to sustainable transport. We are still favoring SOV’s above all else, and that’s not a great way to achieve our city’s long term goals.

@BURR — I don’t think we need to shame anyone at PBOT, many of Portland’s planners and engineers there understand these issues, but there is not enough support from our political leaders to allow greater innovation, radical road dieting, and more equitable budgets that would allow for the solutions to be implemented. Perhaps we need to create the political “safe space” needed for our leaders to do the right thing. Visionary leadership is transforming many American cities right now, we should continue to ask ourselves why Portland is no longer the leader in progressive solutions to make active transportation safer and more attractive to all.

@Matti — I’ve heard that before, but I am unconvinced. I believe it is still way too easy to get around by SOV in this city, and we should be prioritizing other forms of transportation.

@Meeky — thanks! We actually grew out of the PSU Traffic and Transportation class, I highly recommend seizing that opportunity when it comes up again this year.

Thanks for the coverage, Jonathan. One quick correction: those photos were taken by Colleen Catherine Connolly.