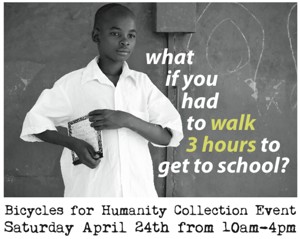 Detail from flyer of Bicycles for Humanity event. The
collection is this Saturday (4/24) from 10am – 4pm
at Washington-Monroe High School
on SE 14th and Stark.

This Saturday, Portlander Jenny Leonard hopes to collect 400 used bikes and send them to South Africa in a shipping container. The event comes after over a year of planning and after Leonard was inspired by a 16-year old South African girl named Mercy.

Leonard met Mercy during a year of studying abroad in rural South Africa while a student at Reed College. She says she took transportation for granted until she realized Mercy walked three hours each way to get to class. “That’s six hours a day spent walking compared to my 20 minute round trip bike ride.”

Inspired by her experience abroad, Leonard connected with the non-profit Bicycles for Humanity and become the leader of the Portland chapter. Launched in January 2009, she had raised $7,000 by February of this year – enough to pay for a shipping container to South Africa.

Now she needs to fill that container with bikes and she’s asking Portland to help her out. The collection event is this Saturday (4/24) from 10am-4pm at Washington-Monroe High School on SE 14th and Stark.

You can learn more about Leonard and get the latest updates on this project via her blog.

What kind of roads should we be donating bikes for? Paved, dirt, or no road? I.e., better to donate an old MTB, or a beater road bike?

Mountain bikes, hybrids, or cruisers are preferred, something with a thick tire that can handle unpaved or poorly paved roads. Thanks for the question! There is more information on my blog (blog.travelwithbread.com) and the website http://www.bicycles-for-humanity.org/Portland. I can be reached at jennymleonard@gmail.com

My grandma walked three miles to school each way… in the snow! And up hill both ways!

Sounds silly, but… does the project need donations of bike locks too? I have a bicycle I’d love to donate. However, I’d hate to see it travel all across the world to reach somebody awesome, only to get stolen from them ten minutes later! Is bike theft a problem in rural South Africa? Or am I just too used to Portland?!

Bike locks are welcome donations, though bike theft is uncommon in rural areas where the communities are small and cohesive.

I did this with the CCC about 5 years ago. I’ll try to be there again. It is good work for your soul.

Pedals don’t come off easy, and when they do they need to be ziped to the bike, and handle bars turned. Seat lowered.

People should contact Jenny, but I bet she’s swamped.

Thanks Joy! And thanks Shower Pass for donating two tri vests to the raffle! http://www.showerspass.com/catalog/men/mens-vests/tri-vest

If you find success send some Bikes to us in Kenya. South Africa is practically a first world country anyway. Kenya on the other hand is Africa. Beater Mountain bikes that can be converted to single speed after their gears fail are the best.
cheers, jamie
karisia walking safaris

James, Thanks for that info. Perhaps me and other volunteers on Sat can brainstorm the next container to Kenya event as we wrap up.

Yes, as a whole region average, Kenya is much worse off than South Africa. But ignore the math, medians, averages in the USA and you will find pockets of extreme poverty and hardship who are denied aid under because they live in a first world country of endless opportunity. We’ve got to have free bike programs for BOTH PDX homeless and for distant needs too.

I’m donating my childhood pristine modernized Peugeot with wide tires and bullet proof hubs/rims. I was saving it for when my daughter in 9 years, and I’ve got the storage. She’ll understand when she get’s older, and pick her own path and ride.