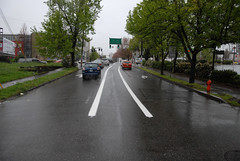 Last week I shared how the East Burnside/Couch couplet project would impact bikeways. One of the biggest changes I warned you about was a new lane configuration on NE 12th at Sandy. PBOT crews installed the new treatment over the weekend and I ventured over to check it out yesterday.

NE 12th is a key street for bike traffic heading north/south, but for northbound traffic trying to cross Sandy Blvd., it was never a pleasant experience. There used to be three lanes with no dedicated space for bikes, no shoulder, and bikes were forced to share a lane with buses.

Now PBOT has converted one lane into a bike-only lane that is to the left of right-turning car traffic and through bus traffic. The result is a much less nerve-wracking experience. Notice how much room bikes have in the before-and-after photos below… 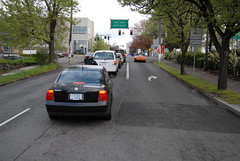 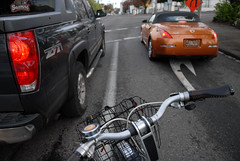 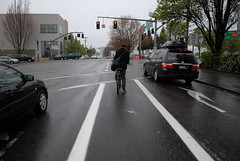 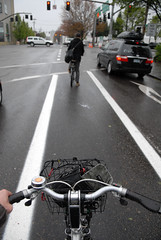 The bike lane is also dashed through the intersection. Have you used this new lane? What do you think about it?

I haven’t yet, but I’m going to soon. Tried to go down Couch to the bridge the other day too, but the little side loop road was still closed off.

Nice to see this intersection getting some treatment, it’s been such a mess for so long.

Holy shit! This is amazing! One of my favorite things to do early in the morning is to fly down Sandy and over the Burnside Bridge, but this has long been a treacherous corner, once the site of me rear-ending a Ford Explorer that had cut me off only to immediately slam on its brakes. I can’t wait to ride in the lane.

I love this – the only challenge we continue to have is the semi tractors that park in the bike lane on 12th just north of Couch. The loading docks there are pretty active and block 12th regularly.

Today with the kiddo in the trailer I had to merge with all the traffic on 12th to get by a tractor trailer parked (the wrong way) in the bike lane.

Actually, it gives cyclists less space. Why the cyclists in the “before” picture dangerously positions themselves at the far left corner of the whole lane they are entitled to is beyond me?

I ride through here twice a day and this is a great addition!
I love all the new construction projects going on!

Dang! N/S on 12th/11th is my commute and it has always really sucked. So far I’m loving the new improvements! (though I just discovered 16th goes from division to lloyd on back streets, I think I like that option even better)

Awesome! I don’t use this route too often, but I can’t wait until the next time I need to. I also noticed the Couch bike lane, and look forward to incorporating that into my Hollywood – Downtown commute.

16th doesn’t cross over or under the freeway, right? So I assume you mean it connects with Lloyd via the 12th Avenue overpass? Or am I not seeing something on Google Maps? I’d love to know a good quiet N-S route.

Actually, it gives cyclists less space. Why the cyclists in the “before” picture dangerously positions themselves at the far left corner of the whole lane they are entitled to is beyond me?

I’ll second this, why didn’t they give a full-width lane to cyclists? There were three full sized lanes before, so they must have made the other two lanes for motorists wider at the expense of the bike lane. The bike lane should have been 8 to 10 feet minimum width. PBOT fail.

16th does “t” with irving just short of the highway, and you complete the connection to lloyd over the 12th avenue bridge. it is not always easy to hook the left from 16th onto irving because of all the eastbound traffic heading for the freeway ramp. but 16th is designated on the PBoT maps as a friendly bike route. maybe eventually that intersection will get a signal or something, but my preference has always been 12th itself. agree with comment 4 that the right turn lane at 12th and sandy has not been a problem (except when the occasional bus is on your tail). not sure if subtracting a northbound travel lane will make things more difficult for motorists, who have already been stacking up through the intersection at ankeney waiting for the light to change . . .

and I’m guessing you probably still have to wait forever for the light to change and it still only lasts for five seconds.

Full width lanes often end up with cars driving in them. Wide is good, but too wide ends up not being bikes only…

Remember you’re not legally protected between the dashes in the intersection!

Gabriel – I take 16 going north from Division and then turn down Ankeny to 12th to take advantage of the light for Burnside/Sandy. Better than playing bikey-frogger on Burnside at 16th.

Full width lanes often end up with cars driving in them. Wide is good, but too wide ends up not being bikes only…

All they need to do to avoid that happening is to paint it green with big bike markings.

Awesome! What would be super-mega-unicorn-awesome would be sharrows along 11th and 12th south of this intersection. Those roads continue to be a menacing experience for cycling. I’ve had cars buzz me even as I assert my use of the full lane.

Would the Transportation Gods please bless us with some sharrows on the east side?

How long are the bicycle lanes on 11th and 12th? Where do they start and stop?

nothing on 11th so far as i know. on 12th the striped lane begins at sandy/burnside and runs north to irving. pretty sure you are on your own on the bridge itself (which is fine with me, as i would rather be taking the lane anyway). agree w/ comment 16 that sharrows would be the preferred treatment . . .

This is nice, but I never had a problem with the prior set-up and never felt unsafe riding north through it…Leading up to the intersection on 12th is another thing.

I’ll third the need for sharrows

“bikes were forced to share a lane with buses” (referring to the right turn/bus lane in the second photo) I always take the straight lane when going straight. Is this illegal? Thumbs up sharrows.

You’re doing it right, AdamG. It’s illegal to go straight through from a right turn only that doesn’t have signage indicating otherwise (like “Right Turn Only Except Bicycles”)

There are *plenty* of opportunities on the east side for sharrows including 11th/12th and 20th in southeast, as well as 7th and 15th north of the Lloyd District. Too many people utilizing cars for transportation still appear to believe that the streets are reserved solely for them, as evidenced by rampant speeding and bike-buzzing on streets like these. Sharrows are a visual reminder that, yes, bikes do belong in the flow of traffic and they’re a great way for the city to support those of us who want or need to ride on busier streets.

Whatever happened to the northbound bicycle lane on most of North Interstate? That street could use some sharrows if they’re not going to put the bike lane back.

Alas, there are currently no good “quiet” north/south bike routes that cross the I-84 freeway until you are up in the high 40s/50s…

The only truly “quiet” street crossing that I would ever dream of taking my young daughter on by bicycle across I-84 is way up at…. 53rd Ave! Come on Portland. We can do better!!

re comment 22, at least until now there has been an “except bicycles” designation on the right turn only sign at this intersection. nonetheless, the better practice was to take the through travel lane — pretty much where the bike lane has now been striped . . .

In response to Paul (#22). I take 12th north 2-3 times a week and there is a sign that says right turn except for buses and bikes. It’s been there for a while and I always just take the whole turn lane.

My preferred route north on my evening commute is on 16th, then up Irving to the crossing at NE 21st. The bridge itself is not too bad–there’s a bike lane on the bridge–though the rest of 21st as you head north leaves a lot to be desired.

But a quick right on Multnomah after the bridge puts you in a nice, quiet zone that you can follow to 22nd and a more peaceful ride (though, yes, you will have to cross Weidler and Broadway).

It’s out of my way, but it avoids the hassles of the Lloyd District.

Are there any plans to do anything about the bike lane on 12th going south through that intersection. You end up on Sandy and cars CONSTANTLY drive in the bike lane on that soft right and pinch riders to the curb. I have been nearly hit many times there and I believe cars have NO IDEA they are driving in the bike lane. Bikes need more space there.

I used to always take 28th N and S, and hated it, until I discovered 33rd across the highway (getting on at Schuyler), then 32nd through Laurelhurst. Yes, 33rd is busy from Broadway until Sandy, but it’s only a few blocks and the right lane is narrow, which means you can assert it with no apology. As I approach the on-ramp to the highway, I actually ride to the left of center to discourage drivers from cutting me off to get on the highway. Once you cross Sandy it’s quiet streets all the way to Ankeny/Laurelhurst Park.

On the other hand, going north on this route is not quite as much fun for me, since I need to merge left before the bridge to get into the left turn lane for Broadway. I don’t do it at night.

They should extend that from Hawthorne all the way to sandy/eastburnside. Though drivers are not so bad on that street.

IMO, East 28th is fine if you are willing to assert yourself and take the lane, but it would certainly benefit from sharrows all the way from SE Stark to NE Broadway.

I used this the other day and loved the space; however, there were two cars encroaching into the lane. They apparently were unaware of the changed and need to go straight rather than right, so they do that through the bike lane.
Just be careful as people adjust.