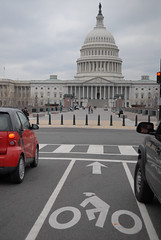 A view of the Capitol this morning.
(Photo © J. Maus)

With the lobby day in full swing here on Capitol Hill, bike advocates from around the country are asking their representatives in Congress to support a variety of pending bike-related legislation. Last night, while looking through some information on these bills put together for us by the League, I was shocked at how partisan all the bills have become.

Close readers of this site will recall several past occasions when Congress Earl Blumenauer spoke about “bike-partisan” efforts to push bike legislation through.

But this year, things have become anything but bike-partisan.

Before the lobbying began today, there were 227 total co-sponsors of six different bills. Of those 227, all but nine are Democrats. There are only six Republicans members of Congress currently signed on as co-sponsors of all the major pending bike legislation in America. Here’s how it shakes out:

Even Oregon is not immune.
League of American Bicyclists executive director Andy Clarke says the partisan politics around biking “has gotten worse.” It’s gotten so bad, Clarke told me this morning, that “We’re at a point where we might have to start introducing two separate bills, one Republican can support, and one a Democrat can support.”

Bike bills are not immune to the partisan politics permeating the Hill these days, and Clarke says, “We’ve just got to play within the system… It’s not that they’re opposed to what we’re talking about, but it’s the party line.”

Even in Oregon, there’s one glaring example of this partisanship. House Representative Greg Walden, a Republican, is the only member of Congress from Oregon who is not currently signed on to any bills on the Bike Summit agenda.

Hopefully, with over 700 advocates armed for battle on the Hill today, we’ll see that line start to change, but that’s a tall order in a town where political alliances between Democrats and Republicans are cooler than the mounds of snow still piled up outside their offices.

I seem to remember the Democrats putting Blumenauer’s bike bill in the stimulus bill to get him to vote for the spending.

Was that bill included because they really wanted to do something pro-cycling?

Is bike legislation a good thing, maybe, but not if done for the wrong reasons.

As a “true” conservative, who believes in personal responsibility and not wasting resources, I don’t see the problem people have with so-called “bike” legislation. In my view, it combines the best of both political worlds: for the liberals, creating and sharing common spaces maintained by “the public” for the good of ALL; for the conservatives, taking responsibility for your own actions, e.g., polluting and damaging things, and becoming more self-reliant and independent (vehicularly speaking). I don’t see what there is to argue about!

I may be conservative, but I have little in common with today’s Republican party.

Gee it would be nice if there were a button to go to our representitive Mr. Walden’s e-mail in this post Johnathan. Yes partisan politics is deplorable, is this what we can expect from change? Maybe we need more CHANGE, then the new politicians might get the message. Good reporting J-

@ #2 – agreed, the efficiency and independence of bicycle travel is an argument for conservatives. Awesome.

I wonder if the current Republic party doesn’t like bike legislation because they see it as part of a “liberal” agenda.

Stewardship of the earth shouldn’t be about partisan politics, but at this point it is. We can bemoan it, and we can try to change it. In the meantime, there is a Democratic majority and with a few Republicans we can get bike work done.

@ #4 – that’s exactly right. Because of our system of government, the party out of power can only make themselves actually heard and influential by opposing whatever the majority party wants. We just need to focus on getting stuff passed now.

This doesn’t bode well for certain bike issues, where there is little to no support on the democratic side, such as increased access to National Forest land, etc.

Hopefully, Oberstar, Blumenauer and others won’t have to horse trade too much to get traction for some of these issues.

Well, the party of NO is in full glory these days. They oppose and can almost block anything. The Republicans have become nothing but obstructionists, the most pathetic political party we have ever seen in the this country. If you want them to support bike legislation, just have Obama oppose it. They will all sign up.

The GOP didn’t stop the health care bill from passing the Democrats did it all on their own.

How many deadlines can Obama ask for only to have his own party infighting pretty much kill the bill.

As for the whole tone of the article just because you don’t sign up to sponsor a bill doesn’t mean you won’t vote for it.

Sponsorship is not indicative of who will vote for a bill.

The only way to truly see how a bill is supported is to see how it passes committee or an actual vote on the floor.

Until either of these happen this is just an attempt to stir the pot trying to create conflict where none exists.

#8, you are partially right, but are spewing the GOP talking points. There are blue dog dems that are really Repubs, so Obama does not have a majority in the Senate. This is the party of NO spin. NOT ONE REPUBLICAN votes for anything that Obama or the democrats propose these days, including bike and transportation funding.
They should just pass everything with a 51 vote reconciliation majority like the Repubs did on the Bush tax cut votes and tell the party of No to go screw themselves.
Evan, you can contact Walden all you want, but he is a right wing tea party teabagging idiot, so you are wasting your time.
It is amazing how a party that screwed up the country for 8 years, now has all the answers and acts like they had nothing to do with anything that went wrong and the right wing sheep in the media and the public buy their ridiculous spin.

All the more reason to banish the party system 🙂 Or at least banish the duopoly these 2 parties have. Nothing is about independent policies, everything is black & white, you’re with us or you’re with them. Pathetic. ESPECIALLY the GOP for all the brainwashing, fear spreading and complete lack of common sense.

They hate our freedom to create liveable cities – cities full of rootless “cosmopolitans” and a direct threat to their politics of fear and racial hatred.

I mean why would anyone expect the current GOP to like utility/city cycling? Sure it’s probably worth a try to find a couple of ethical conservatives somewhere in the GOP, and you might as well try to solicit donations for your local foodbank from Sauron’s minions, too, while you’re at it 🙂 Who knows, maybe some local orc will give you a copper piece or two. Sigh.

Greg, nicely put. Gave me a laugh, and then a sigh…

I agree with those of you who are calling out the Republicans for having no new ideas. Still, I think the larger problem is that many politicians, including Democrats, aren’t seriously interested in cycling in general nor in bikes as a solution to…well, anything. I appreciate this look at who’s sponsoring bills and who isn’t…now we need to go after those politicians who don’t support these bills with their votes. Republicans are an easy target, especially these days, but let’s not forget the Democrats that aren’t participating on this stuff, either. Keep the wonky policy stories coming!

Thanks Jonathan and keep up the good work, but, I am afraid the bipartisan way is the American way.

I may be spewing the GOP talking points, but as a registered Democrat I am completely disgusted with how my party has acted throughout this whole process.

Backroom deals to the unions, backroom deals to buy votes. How does that make us look any better than the bunch we replaced? Where’s the change? Where the ethical behavior we voted for?

I’m using the GOP talking points because they are correct. We as Democrats can’t even work on a bipartisan level between the house and the senate. We didn’t need the GOP vote and we frittered away our super majority. We didn’t talk to the people, we didn’t listen to the people and we lost our momentum by making the process a big secret.

Jonathan, that’s a fabulous iconic shot of the bike lane symbol & arrow pointing to the Capitol.

If we could have had the Portland City crew do the installation on that symbol, it would have been interesting to see what sort of thematic modifications they might have come up with…

I think the real party of “NO” when it comes to policies that would make anything other than private auto transport more attractive is the Motorcratic party. Or the Petropublicans, if you prefer. The problem is that the political parties fronting for these organizations can’t seem to cut the strings–purse, puppet, or otherwise.

Also, since the “people” (Government) have now directly invested so heavily into the U.S. auto industry, we can’t pass policies that might further eat into car sales. I am starting to think that the real reason that the U.S. won’t become more like Nederland is that we have an Auto Industry and they don’t. Passing any legislation that could be spun by anyone as “Anti-car”, would then likely be seen as Un-American.

Just because a bill is labeled “Bike” doesn’t mean that it’s a good or useful law.

This is just another example of the Republican Party in Congress going barking mad. Any good legislative proposal? They oppose it on principle — the principle that they can’t allow the Democrats to do anything (even if they agree with it).

Of course, since every sane Congressman is now a Democrat, the Democrats can’t agree on anything (because the party is a huge tent).

Obviously, sane people must vote for Democrats. The real choice is now in the primaries.

“This is just another example of the Republican Party in Congress going barking mad. Any good legislative proposal? They oppose it on principle ”

Just because they don’t sponsor a bill doesn’t mean they oppose it!!!!

Learn how government works before making these sweeping statements. Until a vote is taken you can’t declare someone for or against the bill.

Based on the above logic even the Democrats don’t support these bills because they all didn’t sign on as sponsors.

Great post! And you saved me a bunch of research time with those bullet points, which I quoted with attribution here:

“Bicycle Hymn of the Republicans”
http://www.commutebybike.com/2011/03/16/bicycle-hymn-of-the-republicans/