[This is the first of several vendor profiles we’ll share in the next month as we prepare to entice you to attend our super-excellent BikeCraft V event coming up on December 5th.] 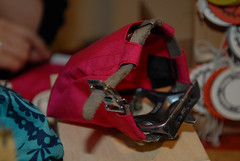 Do you ever wonder how to solve that problem of cold, wet feet on your bicycle? Or do you have trouble finding a cycling cap that will actually fit your head and your sense of style? Ever wish you could carry and organize your cycling tools in a practical (yet oh-so-aesthetically-pleasing) way?

No problem! Check out Bike Cozy, a local, NE Portland based business that sells handmade cycling caps, tool rolls, shoelace wranglers toe cage covers, and more for “the fashionably practical rider.” Bike Cozy’s tag line doesn’t lie: its products come in a variety of colors and patterns and are made from practical, durable materials such as wool, canvas, and cordura. 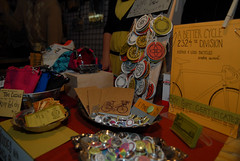 Bike Cozy was founded by Rachel Dominguez-Benner, a Michigan transplant who first moved to Portland in 2006. Rachel became interested in Portland’s bike scene when a friend loaned her a bike for the first couple of weeks after her move. After successfully navigating through the quieter streets of Portland, Rachel caught the bug: “Riding around with other people who knew the best routes helped me get comfortable with the city by bike.”

Dominguez-Benner is a co-owner of A Better Cycle (that opened in late 2007), where one of her colleagues encouraged her to start a business after seeing a personalized cycling cap she made for herself.

From there, Dominguez-Benner used her fine arts background (she has a degree in graphic design and metalsmithing from the University of Michigan) to expand production to include tool rolls, toe cage covers, and some stationery products. 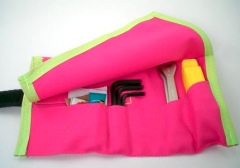 She originally called her business A Red Bee, but changed it after attending BikeCraft IV in 2008 because another “Bee” business was there and “the other business is more established and I didn’t want to step on any antennae.”

“I changed the name to Bike Cozy so my name would be relateable and memorable. While I don’t currently knit frame covers (which some people may first imagine upon hearing the name Bike Cozy)– I do construct neat stuff to make being a bicycle rider and being prepared a cozier experience.”

Future plans for Bike Cozy include creating seasonal items for the upcoming holidays and additional utilitarian products; she also hopes to expand to original artwork. 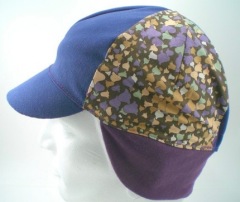 Dominguez-Benner’s advice to bike crafters and other people looking to jump into the BikeCraft arena? “Make a product that solves a problem or satisfies a desire. That may be utilitarian, it may be adornment, or it may be so people feel the camaraderie of being a cyclist.”

those toe covers look great! but my allegiance to heavy metal makes all the colorful other things totally off limits.

yeah, that’s what i meant. the black toe covers are nice looking (from the etsy page), but a pink and green tool roll, no way.