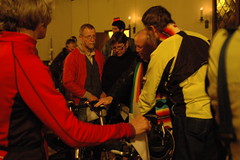 A bagpiper stood outside welcoming the world into St Stephen’s Episcopal Parish at SW 13th and Clay last night for the dedication of the church’s new bicycle shrine. Inside, Halley Weaver played the harp; her bike and the custom trailer she uses to haul the instrument was parked in the back of the sanctuary.

Attendees were invited to roll their steeds up the ramp to the church door and park them amongst the pews.

The Parish priest, Reverend Dennis Parker, was wearing his preferred cycling gear — a leather jacket over his vestments. “We are pretty sure this is the first bicycle shrine in the nation,” he said. “We googled several variations of ‘bike church,'” he said, “but the things we found were all more like bike shops.” 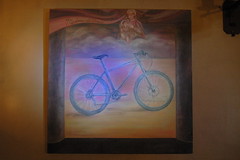 Everyone in attendance (including a sizable media presence) settled down and Rev. Parker made a brief speech to dedicate of the shrine, saying some nice words about everyone striving to be good to each other on the road.

The shrine itself is basic — a painting of a bicycle, some candles and flowers. The hope, Deacon Ken Arnold told me, is that people will bring flowers and add meaningful mementos. They’d like to have a bicycle there permanently. 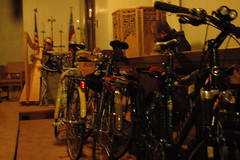 The organist and harpist began to play and the congregation began a short chant. Flanked by two other clergy in vestments and yellow rain jackets, Rev. Parker walked through the sanctuary, stooping to daub holy oil on the chain of each bike and to say a short prayer: “Bless this bike for safety, health, enjoyment, and celebration.”

The shrine will be open during daytime hours for anyone of any faith who would like to stop and spend some time there. And you can feel free to bring your bicycle in.

bikes in a church? that doesn’t remind me of my church, however its ounds interesting

If you need a harpist for your fall or winter event, you can book Halley via her site (http://ilikemytie.com/buskerslife/).

I like that the picture appears to be a fully rigid mountain bike with disc brakes. Anybody know who it’s by?

If I roll through stop signs, do I have to go to confession?

just so everyone knows, this won’t do anything for you but make you feel nice. you’re still gonna get flats, get cut off, etc. to think otherwise is just superstitious.

Huey #5 – come on dude. A bona fide man w/ the title of VERY REVEREND actually used HOLY WATER on the bikes (well at least on the chains). At least noq they’ll repel the undead better than without having been doused in holy water. Good for the coming zombie-pocolips at least.

This is a joke, right?

Reminds me of the 24-hour Church of Elvis, sans crazy lady.

Maybe they should have holy chain lube!

The bike in the picture looks almost exactly like the Kona Unit, except for the derailleur:

This is not a joke. One significant aspect of the shrine is to commemorate those, of any faith or none at all, who have died on their bicycles. Part of the liturgy that night was specifically recognizing the dead. It was timed for All Souls day for that reason. It is not established to create some sort of spiritual shield against harm. Unfortunately, we have one more life to mourn for which this shrine is dedicated. (http://bikeportland.org/2009/11/04/update-on-willamette-fatality-motor-vehicle-operators-given-duiis/)

They said that bicyclists are invited to visit and rest/meditate/warm up whenever they like. Bikes welcome through the ADA-accessible side entrance.

hi Ted – how is Portland? Are you living at the Bike Temple now? t