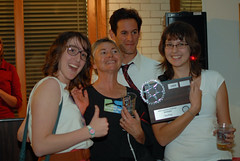 The women of Gladrags were
one of five small businesses with 2-4
employees who commuted by
bike every day of the month.
(Photos © J. Maus)

The BTA announced results of their 15th annual Bike Commute Challenge tonight. The event, which pitted workplaces against each other in a friendly competition to see how took more bike trips in the month of September, had the highest participation rates in its history.

Here are the numbers: 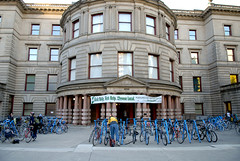 The BTA did not skimp on bike
parking for this event.

Those are some very impressive statistics… but how did individual businesses stack up? Here is the full list of winners from each category: 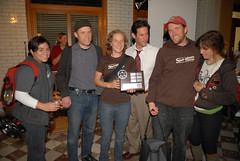 The crew from Stumptown Printers.

Businesses and non-profits with 25-99 employees:

Community Cycling Center with a 90.4% commute rate (that’s up from 78% last year)

Businesses and non-profits with more than 100-499 employees

First Alternative Co-op of Corvallis with a 37.1% commute rate

Businesses and non-profits with more than 500 employees

Public agencies with less than 25 employees: 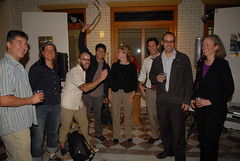 The Bureau of Planning and
Sustainability is in a class
of their own.

Portland Bureau of Planning and Sustainability with a 51.5 % commute rate.

Public agencies with more than 500 employees:

Oregon Department of Environmental Quality with a 10.2% commute rate

Bike shops with 16 or more employees 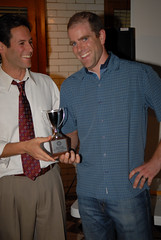 Brian Reynolds Distance Award:
To the commuter with the highest mileage:

Chris Bell, Super-Commuter
I tracked Bell down after he accepted his award and learned more about his amazing feat. Bell, who lives near Mt. Tabor in Southeast Portland, said he would leave home at 4:50 in the morning and that the journey takes him three hours (at an average of 18 miles per hour). The total round trip is about 130 miles (that’s about 500 miles a week!). He’s thankful that his employer, ODOT, has showers and lockers (he sweats a lot) and his co-workers think he’s a bit crazy.

The “Wonder Twins” Reign Supreme
For years, staffers from the City of Portland’s Office of Sustainable Development and the Bureau of Planning would finish 1-2 in their category (Public Agencies 100-499 employees). So now that the two bureaus have merged into the Bureau of Planning and Sustainability, its become something of a super-team.

Out of 104 total employees, 76 of them rode to work in September, taking a total of 985 trips by bike for a 51.5% of total days biked. The next closest competitor in this category, the City’s Bureau of Environmental Services, tallied a percentage of days biked of just 22.9%

I caught two members of the winning team, James Valdez and Kevin Veaudry Casaus, near the results. “We win every year, so now we’re just seeing by how much.”

PSU Campus Rec upsets the Mayor’s Office
Members of Team Mayor Sam Adams were stinging at getting second to the PSU Campus Recreation team in the 25-99 employees category. The two teams were evenly matched with 26 employees logging 210 and 220 total trips by bike respectively, but the PSU team ended up with 51.1% of days biked vs. Team Sam Adams’ 42.7%.

Adams’ Transportation Policy Advisor (and former BTA chief) Catherine Ciarlo’s tweet summed up the mood. She wrote, “Trying not to be bitter about our team coming in second behind PSU Rec Dept in the Bike Commute Challenge.”

Come on PBOT, do it better!

The True Spirit of the Bike Commute Challenge
To me, the most inspiring thing about the BCC is how it motivates and inspires the companies and organizations where biking isn’t already part of the fabric but who are making strides one employee at a time.

As I hung around the result sheets, shrieks of excitement made me turn to three people looking way down the list. They were employees of the Native American Youth and Family Center. They had placed 120th, but said “That’s still awesome!” The employee (whose name I regret not taking down), was thrilled to take part in the BCC and said it was an inspiring event for her and her office-mates. 15 out of 83 employees took part in the challenge, logging 158 trips, for a percentage of days bike of 9.5%. That result is “pretty rad” she said.

Bravo to all the folks who gave biking a try for the first time last month (and to those who biked more than usual). I think next year you shouldn’t have to wait in line for beer.

I do the Portland-Salem commute occasionally – congrats to Chris for doing it every day!

Zaphod – I don’t about Chris’s route, but I have three or four different routes, ranging from 45 to 65 miles one way, whichever one I choose depending on the weather, the timing and how much traffic I feel like dealing with . . . . often I take my bike down to Salem on the state employees’ commuter bus, and ride home, but most of the time I ride from my home in SE PDX to the Barbur transit center, lock up my bike and take the bus both ways – making for a much more reasonable 22-mile round trip

I’m impressed. I rode my bike down to Mexico during the month of August, and I only managed 1,580 miles over the course of that month. 1,828 is quite outstanding.

unfreakingbelievable! Chris Bell looks just like the guy who did a hit-and-run me on the Tom McCall waterfront path about three weeks ago – he was hammering through heavy pedestrian and bike congestion all the way to his left on the path and hit me head on, then accused me of getting in his way, and left the scene. My hand is still healing. Of course, I could be wrong about his identity…but it sure looks like him.

benefit of the doubt

BURR, Since when is it okay to defame somebody and then tag a little disclaimer…”Of course, I could be wrong about his identity…”
Did you at least contact Chris first?

This is great and all, but it seems like most who take on the challenge likely stop when the weather gets “bad” and it gets dark early. Any plans to move this event to June and have a 4 month challenge? Or just move it to June and likely new commuters will keep biking throughout the summer without being challenged?

Huge effort to ride to Salem every day by Chris Bell but some inconsistencies in the numbers. Did he ride every day? At 130 miles that would be 2730 miles. The writer says “130 miles per day (that’s about 500 a week)”. No that is about 650 miles a week. Super effort but it would be better if we knew the real numbers.

Rico #15 – can’t move to June unless they move the bike commuter census thing as well! How else can PDX load/log high bike commuter numbers….

I believe Chris used to ride to Wilsonville and catch the bus there to and from Salem. Perhaps he multi-moded some of the workdays in September.

The “awards” categories are not exactly reported fairly. Statistics are easily distorted based on how they are presented.

Most of the government/public entries that had high results were merely divisions or small pieces of the agencies. While at the same time most of the private companies are rated as a whole.

My employer has ~ 4000 employees in Oregon. If we divided up by division we would have had some divisions have over 90% bicycle rates as well! Our company has ~ 6000 employees in 4 states and our “rates” are computed against that total.

How would have many of the public agencies rated if they were not broken down by such small divisions? For example, OHSU employs over 10,000 people yet the “OHSU Pediatric Pulmonary Division” won the “Public agencies with less than 25 employees” category.

Hey John, I think they’re supposed break it down by worksite (physical location). I don’t think it really works out too consistently, though – what with the voluntary self-serve nature of the system and diverse understanding of “captains” – but it’s just for fun, anyway, right?

I didn’t see any place where they said he made the commute every day.

John Reinhold — I’m sure that as the bike commute challenge continues to grow, the categories will become more specific and as a result the competition more fair. But considering that all commutes are self-reported, though, complete fairness is a pretty tall order for a free event. I think the most important thing about the BCC was to have fun, enjoy some friendly competition, and challenge yourself to either start riding or ride more consistently. I hope that, despite feeling like the final awards were unfair, you had a great time participating and will continue to commute by bike.

Thanks to the BTA for organizing such a fun challenge! Our team will for sure be back next year.

Wow, 6 hours a *day* commuting? I don’t spend 6 hours a *week* commuting and I think my commute is too long. I’m extremely impressed with his dedication but I’m curious to know if he has considered moving closer to his workplace or explored transferring within ODOT to one of their Portland locations.