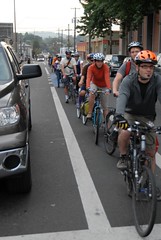 The City of Portland Office of Transportation just released a statement that includes results from the Census Bureau’s 2008 American Community Survey.

The annual survey found that Portland’s bike commute mode share has risen to 6.4%, that’s a jump from 4.2% in the 2007 survey — and the largest year-to-year increase in Portland’s history.

In a press release about the survey, Portland Mayor Sam Adams — who has been in charge of PBOT since 2004 — said the survey numbers show that the City’s meager investment in bikeways is bearing fruit.

“Our small investment in bicycling infrastructure and education are paying off in a big way. Once again the data backs up our belief that when Portlanders are given a safe, convenient alternative to driving they will get out of their car and onto a bike.”

Here’s how the Census asks the commuting question:

Many advocates and insiders realize that the Census number is not a good indicator of overall bike usage. Jessica Roberts, a bicycle planner with Alta Planning and Design told us last year that “it’s important to remember that this survey is only concerned with trips to work, which account for a mere 1 out of 8 bicycle trips.” That being said, Roberts added that the Census numbers are very useful as a comparative tool because they have been taken for many years with consistent methodology.

Along with the announcement this morning, PBOT released two graphs showing the dramatic increase in bike usage in recent years: 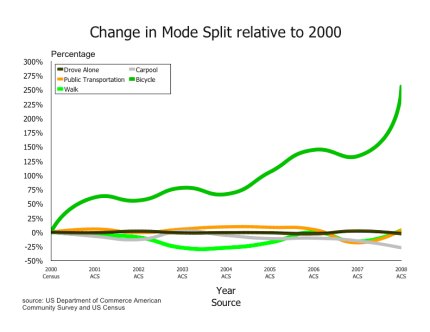 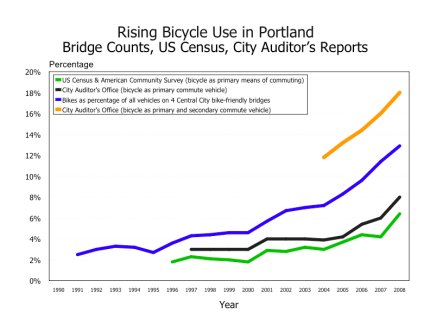 I knew that biking had caught a HUGE climb this year. Awesome to see it in numbers!

That accounts for the also larger than expected drop in transit ridership also!

It is great when people get out of their cars and reconnect with their city through transit usage, it is even BETTER when they get out and experience & live in their city by bicycle commuting!!!

Interesting choice of words for the city’s investment: meager. It would have been helpful to define that, i.e. percentage of transportation budget. It also sounds as if that term was in the city’s press release. I doubt it.

It does show, though, that small investments can produce great rewards. Regardless, the actual investments pale compared to the view we get of Portlanders riding to work, to shop or for fun. That really encourages more participation. I am always happily surprised at the number of fellow commuters and riders I join every day.

Nice to see. Are these stats based on an annual average to do they reflect a certain time of year? It will be interesting to see if as many people are still riding during Wet-tember here in Portland. My yellow Burley jacket is yawning and stretching after its Summer break.

The ACS draws its sample from an equal number of people each month, so it’s an annual number. These numbers are for calendar year 2008.

Good to see an illustration of what I sensed during my commutes. I do hope it will lead to more significant investment in needed bike infrastructure when the economy shows more improvement. I also hope it helps make the case for ensuring streets are safe for bikes in light of streetcar and Max planning.

Im glad to see we have some numbers to back the increase. Its probably obvious to us, but this will show we are getting some return on investment, and as we continue forward I hope more investment yields more riders and safer streets for all.

Nick, my guess is see how it dips a little every year? That would be the winters. 🙂

Link to the Portland Office of Transportation statement mentioned in the first paragraph?

Also, some clarification of the second chart would be good. Are the ACS and City Auditor data on primary commuting etc. percentages of *trips* (e.g., in 2008, 18% of all commute trips were by bicycle as a primary or secondary vehicle) or of *population* (e.g., in 2008, 18% of all commuters used a bicycle as their primary or secondary vehicle)?

Rich R: I wouldn’t be so sure. Last year the price of gas spurred a lot of people to give bike commuting a try. As the price of gas has come down I think that’s going to siphon off some folks who were doing it simply because of the of the money savings.

As far as my own personal experience, I could definitely feel the jump in bike commuters last year, this year it seems more like we’re holding steady or perhaps increasing slightly.

I frequently see more bikes queued up at lights than cars. I hope these numbers help justify/legitimize going big on some projects that help cyclists and, as a side effect through reduced traffic, motorists as well.

Calling the city’s investment “meager” is editorializing. I believe the quote that follows is exactly what the Mayor’s office said.

I agree that many factors contribute to increases in ridership. We can assume that infrastructure investments are among them regardless of scale. I think one of the most encouraging and influential factors in ridership growth is just seeing more riders on the streets. It makes me always want to get on the bike for the trips where I can do that.

You ran a previous story showing bike infrastructure investments around the world. It is useful in that context to show the influence of investments per capita. When I reviewed that data, it appeared that Portland was getting a considerable boost in ridership at a far lower cost per capita for spending. It would be good to review those numbers in light of this new data to see how we’re doing.

Where’s our statistical math geeks that Jonathan Maus said he’d consult for mathy correctness?
Where also are the pundits that can explain the dip in bike AND public transit versus the rise in SOV driving from 2006-2007? This trend then reversed itself from 2007-2008.
Tried to correlate this with gas prices off the historical charts from Gasbuddy.com but it doesn’t seem to like my browser today.

naturally, Sam tries to take all the credit. In reality, us cyclists deserve the credit, we are the tail wagging the city dog.

I’m not a Sam Adams fan either, but at least he acknowledges that the investment is “small”. Maybe he is hinting that a bigger slice of the budget is in the works?

Cyclists-keep riding and being seen on the streets. Way to go!

Sam Adams-keep working it at the City. Way to go. We need insiders like you.

And does it really doesn’t matter who gets the credit? Let’s just keep doing each of our own parts to keep growing and making Portland biking better and funner and safer and wildly available to more and more folks.

meager investment… big return. Now try a significant investment and see what you get.

Biking, walking, and transit all increased from 2007 to 2008. See what happens when gas prices rise.

Where do you see 6.4% I see 6% for Portland using the Place option on the report S0801. Commuting Characteristics by Sex. Maybe I’m looking at a different ACS report?

You’re right, Todd. How could the City get something so obviously wrong?

It appears the city is reporting a higher percentage than the ACS report because they’re subtracting workers that work from home. 6% of Portland workers do bike to work. However, 6.4% of those that commute, choose a bike.

Thanks for your help, Michael!

That’s a good catch, Todd. But that is not the proper statistical representation of the data – merely spin. And unnecessary at that! BTW, it’s been city ‘policy’ to not report ACS data as ‘correct’ until this year…because it has been ‘too low’. Now that the numbers are more in ‘agreement’ with the ‘goal’, it’s now OK to cite.

I tried finding these statistics in the 2008 American Community Survey and I can’t find it.
http://factfinder.census.gov/servlet/DatasetMainPageServlet?_program=ACS&_submenuId=&_lang=en&_ts=

I see that bicycle use is aggregated with taxicab and “other means.”

Congrats to all those Portland bike commuters!

Try go to this page and select the “List all tables” link. Look for the table “S0801: Commuting Characteristics by Sex” then the Next button. Choose your geographic region and show the results.

Thank you, Todd, for pointing out table S0801. According to the American Community Survey, the bicycling rate in the City of Chicago increased from 2006 to 2007, and decreased from 2007 to 2008.

Your percent may have dropped from 2007 to 2008, but the drop is well within the margin of error.