[This preview of the 2009 Cascade Cycling Classic was written by photographer/race reporter Pat Malach. Recently on BikePortland, Pat shared a primer on the 2009 racing season. See more excellent racing coverage and photography on his blog, OregonCyclingAction.com.]


A look at the preliminary rider list for the upcoming 2009 BMC Cascade Cycling Classic in Bend backs up the promoter’s boast that this could be the largest, strongest field in the history of the 30-year-old race. 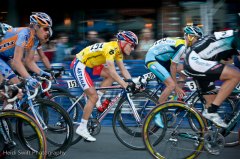 The six-stage, USA Cycling National Race Calendar event, which starts Tuesday, July 21, and continues through Sunday, July 26, has attracted a talented field of riders ranging from the hottest up-and-coming American riders to some of the world’s most elite former Euro pros. They’ll be battling each other and the elements as temperatures should stay in the 90s throughout the week.

Big names in the field include former Tour de France champion Floyd Landis, who finished first in the 2006 French race only to have it stripped away after failing an anti-doping test. Riding with Landis on the OUCH/Maxxis squad is Chris Baldwin, one of the nation’s best stage racers. 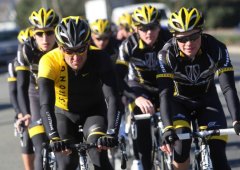 The young guns in the field will be wearing the yellow, black and white of Lance Armstrong’s Trek-Livestrong Team, a development squad that features 18-year-old World Champion Taylor Phinney. Phinney won the gold in individual pursuit at the UCI Track World Championships in Pruszków, Poland, at the end of March and has been focusing on the road since.

Although they may be lacking Phinney’s supply of the youthful exuberance, Rock Racing will bring a motley crew of Euro Grand Tour pros whose veteran guile is sure to make for an interesting mix in the peloton.

Rock Racing’s Victor Hugo Peña, a former teammate of Lance Armstrong, wore the yellow jersey in the Tour de France for three days in the 2003. Also coming to the Classic this year will be Spaniard Oscar Sevilla, who twice finished second in the Vuelta a España and finished seventh in the 2001 Tour de France, and Francisco Mancebo, who won a stage of the Amgen Tour of California earlier this year. 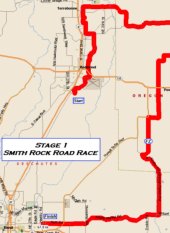 For the sprints, Rock Racing will rely on Ivan Dominguez, also known as “The Cuban Missile.” Dominguez, 32, is considered the top sprinter on the North American circuit and has won stages at all three of the U.S. “grand tours” (California, Georgia and Missouri) while racing for Toyota-United the past three years.

The Bissell Pro Cycling Team will return to Oregon after its successful outing at the Mt. Hood Cycling Classic, where Paul Mach took the overall win. This time around Mach will be joined by seven other riders, including Ben Jacques-Maynes, Burke Swindlehurst and Tom Zirbel. 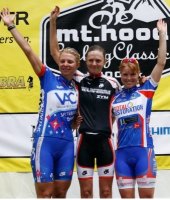 Portland-based Veloforma/ZYM would
love to see Mellisa McWhirter on
the podium in Bend.
(Photo: Veloforma/ZYM)

The Women’s Pro/Cat 1/Cat 2 race also promises to field some of the toughest competition in the nation.

Colavita Sutter Home/Cooking Light is sending a full squad, including criterium specialists Tina Pic and Portland’s Kelly Benjamin. The Webcor Builders team is also ready to race; Amy Dombroski and Gina Grain will lead the eight-rider squad. Hillary Billington, another Portland rider, will be in town with the Lip Smacker Cycling Team.

Here’s a rundown of the six stages:

Stage 1: Smith Rock Road Race, Tuesday, July 21
This brand new 71.2 mile stage will start at the Deschutes County Fairgrounds in Redmond and head directly north into the arid desert past Smith Rock State Park before following the Crooked River through farm country and back to Bend. This may be one for the sprinters before the terrain gets to steep.

Stage 2: Three Creek Road Race, Wednesday, July 22
This 80 mile race, which starts at Summit High school in Bend, heads north toward Redmond and Terrebonne before heading west toward the mountains. Bordering the eastern flanks of the Cascade Range, the course will take riders to Sisters before the long, 10-plus mile climb that just keeps getting steeper until the finish Three Creeks Snow Park in the Deschutes National Forest.

Stage 3: Skyliners Time Trial, Thursday, July 23
The 14 mile out-and-back individual test starts out flat and fast but transitions quickly into the 1,000 feet of climbing toward the mountains and the turnaround. The descent back to the finish will push the riders’ biggest gear.

Stage 4: Cascade Lakes Road Race, Friday, July 24
Starting at Summit High School, the course traverses the Cascade Lakes Highway and a number of forest service roads while winding deep into the Deschutes National Forest and around Mt. Bachelor, where the race will finish after the 5km Sparks Lake Climb. “The classic course that has determined more overall victories than any other stage,” according to the promoter. The men will cover 84 miles, and the women will ride 71.

Stage 5: Downtown Bend Criterium
Last year an estimated 14,500 people packed the streets to watch this one. The promoter says the new 2009 course is even faster. And with some of the country’s best sprinters headed for town, this one won’t disappoint anyone looking for a fast, rowdy race. Women race 60 minutes, starting at 5:45 p.m. Men race 90 minutes at 7 p.m.

Stage 6: Awbrey Butte Circuit Race, Sunday, July 26.
This final stage could play a big role in the overall outcome if it’s still close. The 17 mile circuit skirts Bend’s outer housing developments and goes through both Tumalo State Park and The Shevlin Regional Park. Short power climbs and fast descents favor the strongest all-around rider. “It comes down to who is willing to make the decisive break and power the effort home,” according to the promoter. The men will cover five laps of the circuit. The women will race four.

Check out the Cascade Cycling Classic website for more info. For up to the minute race reports and photos, check out Oregon Cycling Action and Heidi Swift’s Everyday Athlete blog.