Have faith in bikes? The Bike Temple is here for you 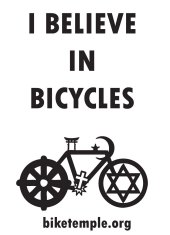 Why the combination of bicycles and religion? According to the Bike Temple’s pamphlet, which can often be spotted in spokes and on handlebars around town, “Bicycles give us happiness, good health, a closer communication to our communities, lower consumption, self-appreciation, and most of all, fun!”

“I’ve always believed in bicycles the way other people believe in deities. You can be saved by your bike. Bicycles keep everyone from driving cars. It’s evangelical, theological, practical.”
— Pasture Ted

The founders of The Bike Temple (who asked to be identified by their self-appointed religious titles), discussed during a business meeting last week how they came to be. It began with a conversation between “Kernal Loose Nut” Moses and “Pasture” Ted during the Pedalpalooza bike festival in 2008. Ted had helped in the birth of the Bike Church (now the Davis Bike Collective) in Davis, California in 2004 and wanted to create a similar community here in Portland. Ted explains, “I’ve always believed in bicycles the way other people believe in deities. You can be saved by your bike. Bicycles keep everyone from driving cars. It’s evangelical, theological, practical.” He adds, “We’re not trying to push an agenda. We’re trying to express what we see as a collective civic belief of the population, expressed through their behavior.”

Portland’s behavior sent a clear message to the Bike Temple founders. With our multitude of themed group rides and festivals honoring two-wheeled, pedal-powered vehicles, the answer seemed obvious: “this is something the community has been asking for.”

“Deacon” Amos has a passion for bicycles and religion. “If they’re the same,” he says, “it just makes for a more efficient service.” He explains the Bike Temple’s long-term goal of having a permanent space to grow and build their ministry. They envision a “bike club house” with a shop where people can work on their “venerated mode of transportation,” where kids can grow up together in a supportive environment, and the community can build closer together.

Currently, Bike Temple founders are in the works of finalizing their plans to move into the basement of the Lotus Seed Ashram in NE Portland, where they will offer a small bike shop and space to congregate and having meetings.

You can also spot the Bike Temple’s “Mobile Shrine” out at events. This human-powered bicycle sculpture is a homage not only to different faiths, but different Portland bicycling groups. The towering dome features a decommissioned Sprockettes frame, ZooBomb frames, cruisers, BMX, and touring bikes just to name a few. Learning about Quakers on the
“Joy of Sects” ride back in June.
(Photo © J. Maus)

Already have a spiritual path? That’s great, Amos says. The Bike Temple doesn’t aim to provide a replacement faith, but “wants you to explore and believe in the religion of your choice.” They strongly support exploration and education about a variety of faiths, such as during their Joy of Sects ride during Pedalpalooza 2009 when they visited a variety of religious institutions (see BikePortland’s ride report here). A sequel is in the works: The Joy of Sects II, Deluxe Edition, on August 2nd, will visit five churches and attend a religious service.

The Bike Temple aims to show their commitment to community-building practices through their involvement with events such as this weekend’s Northeast Sunday Parkways, where they will be blessing bicycles, lubing chains and fellowshipping in the intersection of NE 17th and Going Street.

The majority of their ministry work is currently done through BikeTemple.org, where you can find information about upcoming events, theological discussions, community outreach projects, and bicycle poetry.

Check out our past coverage of the intersection of bikes and religion:

– Deacon Amos’s touching eulogy at the Michael Jackson memorial ride and dance party last month is definitely worth a read.

– St Mary’s, a Catholic church in Northwest Portland, holds an annual Blessing of the Bikes.

– We’ve done a couple of stories on Hinson Baptist Church in Southeast Portland, which encourages congregants to bike to church and partners with the Community Cycling Center to host an annual free bike tune-up day.

As a local bike-celebrity/theologian, how does the naughty Reverend Phil feel about this cult muscling in on his territory?

@Brock
It’s Pasture. We can’t all take ourselves too seriously 🙂

Brock, the spelling of Pasture is Pasture Ted’s preferred spelling.

“touching elegy” should be “eulogy”

I’m still not sure what to think about this, being atheist myself. Is this basically a club, like any other club that encourages community and positive ideals such as sustainability? Or is there a religious bent to it (which appears to be the case given the repeated support and “appreciation” of various religions)? And if so, wouldn’t religious people be offended by the idea of putting bikes on a pedestal similar to a god?

Elegy vs. eulogy – probably could be either. An elegy (elegie) is a poem of mourning.

Every religion needs its shrines.

i’m with schrauf all the way up to the last sentence. only i have a distinct lack of concern over what religious people will think of this, you can’t not do something just because of other people’s sensibilities. But I would rather know what the agenda is here so i may steer clear like i’m thinking i’ll want to.

To answer your questions: yes.

This is a community “club” that does what it can to get people on bikes and hopefully helps them enjoy it.

And yes, the Bike Temple does have a religious bent to it, although it may not be in the way that you would imagine. We have both atheist and devout members, we are not asking anyone to believe in anything except the impact bicycles can have on people and the earth. We are simply giving folks an opportunity to learn about what people in religious communities think and believe, and we hope that in turn they will do the same for the bike community.

We’re introducing religion and spirituality to bikes and hoping they become good friends.

Dear Bike Acolyte,
Rev. Phil is down for the cause.
Our communities work in harmony.

Ride my bicycle
breathing nature and exhaust
calming and serene

NICE! Its so exciting seeing you get involved in your community!! I LOVE YOU SIS! LOL keep on riding!

Great, I need something to believe in!
What station can I tune in for your late night cyclovangelism broadcasts?
And where can I send my abundant offering to support your ministry?

Mixing religion with bicycling is like pouring motor oil in your beer, why ruin a good thing?

Hailey wrote the “Oregon isn’t known for spiritual piety”. That may be true in the Willamette Valley but here in Southwestern Oregon, you can’t go through the day without at least one over-the-top religious statement thrown in your face. No wonder GW Bush did so well here.

But I had a great time baptising folks at Sudnay Parkways today. And most enjoyed being spritzed as it was a trifle warm. The doctine of perpetual rotation is alive and well in NE Portland today.

Mike; I have definitely been to places in Oregon where religious views are much more in the spotlight than Portland. I didn’t trust my own (biased) assessment though and let statistics speak for me.

The Church of the Bicycle Jesus says: “as long as it rolls.”

blessed be the bikers for they know how to get a round.

Thanks for a great story, Halley!

For those wondering what exactly the Bike Temple is about, well, we’re not entirely sure yet ourselves.

What would a bicycle religion look like?
Pasture Ted

Must be a new branch of Judaism–consider the bike frame, like the star of David, is a structure built of two triangles. I love it!

Oh yeah! This is just what we need! More religion! I can’t wait. Thanks Bike Temple.