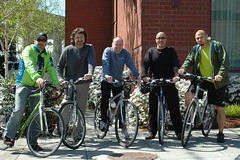 We were pleasantly surprised a few weeks ago to receive an invitation to attend and blog about the opening night of Portland Opera’s latest production, Verdi’s Rigoletto, which opens this Friday, May 8th at 7:30pm at Keller Auditorium downtown.

Sounds great, we said, but what does this have to do with bikes?

Sheridan, who raced ‘cross for four years (“I kind of did it the first time just to show the guys,” she said, “then I fell in love with it.”) is one of several bike loving staff members at the Opera.

A few years ago, Portland Opera began what amounts to a workplace-based bicycle encouragement program. They partner with 7 Corners Cycles to offer any company members coming to Portland free use of a bike, helmet, lights, and u-lock. The program quickly proved itself a popular alternative to the expense and hassle of renting a car for the month or so that company members spend in town working on a production.

The program is unique to Portland Opera, and has been extremely popular — over half the company of Rigoletto decided to take advantage of it, and all have rave reviews of riding around bike friendly Portland, whether by taking to the hills for a workout or heading across town for some coffee or a movie.

“I notice that here bikers actually stop, obey the laws, and are nice. In New York there are no rules.” “
— George Manahan, visiting conductor

Sheridan rounded up several of the company members one morning last week to talk about their experiences working out and getting around by bike during the four weeks of their stay here in Portland.

From their hotel to the rehearsal space across the river, it’s 6 minutes by bike, 12 minutes to drive, and 30 minutes to walk. So biking makes a lot of sense — and having bike parking available on both ends seals the deal, said Seth Hoff, the production’s assistant director, who commutes year-round by bike in Chicago.

“It’s a wonderful perk,” said bass Peter Volpe, who introduced himself as “the Assassin.” He loves the health benefits of bicycling (opera singers cannot afford to get sick). Volpe claims, though, that he’s “not a serious biker,” comparing himself to tenor Richard Troxell, who dons lycra to take long rides on his days off. 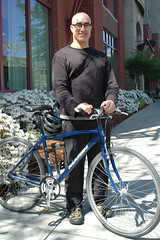 Opera and bikes aren’t necessarily an intuitive combination. Tenor Richard Troxell told me that when he tells people he’s an opera singer they’re always surprised he rides a bike. And when he’s out on a long ride, nobody can believe he sings opera. The stereotype is “enormous ladies with horns,” I was told. But that is no longer the state of the industry.

Most opera singers these days must keep extremely fit. At least, “if we want to keep our jobs,” said Troxell, the one dedicated long-distance rider of the group. Portland Opera’s bike program is “a wonderful perk,” says Volpe, both in terms of exercise and transportation.

Troxell added that riding serves as psychological training for his work, as well as physical. His role in Rigoletto requires stamina, and it’s all about recuperation. So “you ride, hit hills, and see how fast you can recoup. This opera is the same. You have a long solo, and then you have to be ready for the next one right away.” He recently did Madame Butterfly in Montreal, which required prolonged singing and therefore “lots of long rides.”

It was fascinating to hear outsiders talk about Portland as a place to ride. Everyone remarked with wonder at how polite and compliant they find people on bikes here. “I notice that here bikers actually stop, obey the laws, and are nice,” said conductor George Manahan. By contrast, “in New York there are no rules.”

Volpe talked about a revelation during his last stay in Portland when he was pulled over by a motorcycle cop and given a lecture on the law. “That’s when I learned,” he said in amazement, “that you have to follow the rules of the road” on a bike.

Hoff had a similarly revelatory experience during his first trip to Portland when he stopped at a red light because he saw two other people on bikes stop, too. “Do I have to wait?” he asked them, and they nodded. “So, when in Rome…” he said. 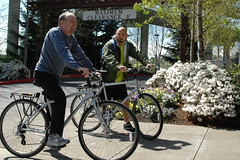 The best story, though, was from conductor George Manahan, who is also the music director of the New York City Opera. He hadn’t been on a bicycle in 12 years — and even back then, as he puts it, “never rode in the city, never locked my bike to poles.”

That all changed two weeks ago when he arrived in Portland after the other company members and saw them riding everywhere. He went down to 7 Corners, took a test ride around the block, and hasn’t looked back.

Manahan’s wife is coming into town on Tuesday to stay for the duration of Rigoletto’s run, and he plans to rent a bike for her as well so that they can ride around town together. Portland made him a convert — he plans to keep riding when he returns to New York.

Rigoletto is supposed to be one of the most accessible operas (though it’s not so popular with the critics). This is the first time Portland Opera has invited bloggers to their opening night. We’ll be there, and let you know all about the opera-by-bike experience via our Twitter feed.

I’ll agree with the critics; not a huge fan of Rigoletto (the Opera, not this particular production).

But speaking of accessible operas – the 2009/10 season is full of them: La Bohéme, Cosi Fan Tutte, and The Barber of Seville. If you have an itch to check out Opera by bike for the first time, any of those three would be a good place to start. I’ll gripe a bit about the lack of bike parking at Keller Auditorium, but (providing the rain doesn’t spoil your outfit) it makes for a magical evening.

I’d like to point out that we have an incredibly over-achieving opera company here in Portland. As a lifelong opera fan, and having seen operas in New York, San Fransisco, Seattle (all companies with giant budgets) and Portland, I have a bit of perspective on the subject. And I can say without qualification that Portland Opera is a fantastic Opera company. I’ve been attending for three years now, and I have yet to see a bad show. (I’d also like to point out that I am in no way affiliated with Portland Opera, just a happy customer for 3 years).

I wish the Opera had something like this in place when my father (Andy Hamon, z’l) was singing with them. He was very big and very tall, and not in the best of health. Heart trouble and diabetes forced him to retire from the opera after singing less than five full seasons with them. But as a parent who was proud of his baby riding her bike all over town in any weather, he would have LOVED this idea and supported it wholeheartedly.

This is how cultural change snowballs: you have cyclists working everywhere (including the opera, the City, the Water Bureau, the ballet, hotels, coffeeshops, etc), and they bring their energy and ideas to their own workplace. It’s really exciting to see how much is happening ‘on its own’ thanks to hard-working, passionate individuals.

+1, Jessica! I couldn’t have said it better.

I long have thought “Figaro” should be done on bicycles, with the Count on a Harley.

Cosi Fan Tutte is the first opera I ever saw, and I remember being surprised that it was actually funny! I didn’t know opera could be funny.

I’ve seen a few of Portland Opera’s shows, and I always love them. Holy moly, Faust was so good I cried all the way through the Jewel song. But then, that’s my favorite song from that opera. *sigh*

There IS GREAT bike parking across the street at the 200 Market Street garage (behind Carafe and Murata) BIKE AND SING!

@ Jim (#5) — OMG! Brilliant! Call Portland Opera and offer to help with stage direction. (For a slightly different interpretation, put the Count on a Segway…)

Great idea, Beth, the Segway (less pollution on stage), and Figaro does a track stand on an old fixie:

Probably you can tell I have watched Bergman’s “Zauberflote” several times too many!

Rigoletto by bike just in time for Pedalpalooza, anyone?

Just to fill in the cracks, there are many opera employees (non-singers) who bike commute year-round. Myself included.
#10, yes! I think you should put that together!

How bad-ass is this? The opera revolution is coming! Opera is one of the more amazing art forms and moves like this only help spread that message. I know I’ll be there opening night. Go, PO!

Jim Lee I am trying to get in touch with you, know you from Charlotte NC please respond and let me know how to contact you.