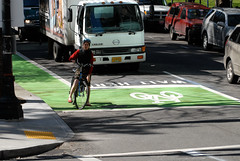 Back in January, we reported that Portland had potentially had a record low number of traffic fatalities in 2008.

PBOT has now made it official — we have never had fewer traffic fatalities in any year since they began keeping track in 1925.

In 2008, 20 people died in traffic crashes. Fifteen were in cars and five were on foot. For the fifth time in the past ten years, there were no bicycle-related fatalities.

PBOT released the official numbers today and Mayor Adams’ office sent out an email this morning announcing the record and giving considerable credit to the city’s Safer Routes to School program and its 2007 installation of bike boxes as examples of the city’s efforts to make its streets safer.

and not one single cycle-track necessary, how about that?

Certainly good news. I’m sure the high cost of gas last summer that reduced the number of people driving contributed to these numbers.

No way to make definitive causal relationships, but I’ll venture to say that increased bike use and decreased car use led to the improved numbers. All of which could be reversed by opening up the 12-lane floodgates from the Columbia!

Let’s all show up on Sunday at Waterfront Park at noon, and fight this thing!

Here’s a great map of rides that are leaving from all points of the city to meet up at that rally. Thanks, Shift, for doing that!

This is great news!

I think it would be a great idea for the city to run an advertising campaign thanking its citizens (and particularly its cycling and pedestrian citizens) for making the city a safer, more livable place. I think it’s important for people to hear that kind of thing, and important for people to know what it really is like out on the streets – that it’s getting less dangerous all the time.

Keep it up everyone, maybe eventually people will start to realize that cycling as transportation is not dangerous 🙂

Yeah, but we’ll have a soccer team! Thanks Adams and company!
What’s $70 million anyway, when you’re endorsing a bridge that costs 60x that?

I love soccer as much as the average person, but I don’t want to spend $70M on it.

I’d like to ride my bike over to Vancouver as much as the next guy, but I don’t want to spend $4B+ on it.

Now, I like not dying on the road, and I’d spend a few bucks to increase the likelyhood that this doesn’t happen.

Always nice to get some good news like this. It may just be my own perception, but I just feel safer out there lately.

Thanks to all the drivers who slow to let me cross off the Hawthorne bridge into the left turn lane every morning.

Surely that Idaho stop law would increase those bike fatality numbers by 200% or more. 😉

For the last decade, this number has only swung up or down within a margin of 10 instances. This is statistically insignificant, though obviously the closer to zero the better.

I just don’t see why anyone should be patting themselves on the back. These numbers have been trending downward since the 1930’s, and have been statistically stable for the last 2 decades.

Woohoo, it must be the tireless work of bike boxes and the safe routes/non-profit welfare crowd. Let’s give them some more money.

I’m still happy. For whatever reason, no cyclists died on our watch. I think that deserves a huge pat on the back. Maybe even a back rub.

No Steve. It’s obvious that the bike boxes and the s.r./np. welfare crowd are successful.
Mission completed. No kids died riding their bikes to school last year. Now it’s time to cut funding and spend it on much more important things.
Like over-paid athletes.

I’m in agreement with you that our year-to-year fatality numbers are likely to move up and down between 0 and 10 regardless of our efforts. That having been said, I *like* the bike boxes, I like the extra visibility they give cyclists, and I’m glad the city has installed them. They’re a relatively cost-effective way of making intersections a smidge safer than they used to be. That’s not a bad thing, is it?

…and in terms of getting more people out riding bikes, subjective safety makes a huge difference – making people feel they are safe when they are out on their bikes. Bike boxes, bike boulevards, education initiatives all help to do that.

I love the caption.

Mayor Adams, who has a great track record of good judgement, credits bike boxes as one reason for the low number.

Take the MAX to the Expo and then ride 12 bike minutes to Vancouver…if you do not get lost.

And all this without an Idaho Stop Sign Law? AMAZING! Based on the recent posts on this site I thought bikers were dying in the thousands due to all the stopping they have to do on a daily basis.

Maybe Steve is reflecting what I feel about it. (And I preface this saying this is a personal issue.) It’s a good thing no one died obviously, but maybe “no fatalities” isn’t a very good measure of success anymore–statistically or otherwise.

I’ll be interested in following the links to see if the study included how many cyclists were hit, how many were injured seriously or were life-threatening, what were the causes of the accident, who was at fault and what was the state of driver/cyclist. I think those things would give more information to go on.

Peejay! Come on over to downtown Vancouver, it’s a nice place to ride! Once you’re on the Columbia River I-5 bicycle labyrinth, you’ll make it. We don’t need no CRC, just a little know-how. (it’s a barrier to the inexperienced, but empowering once you know the secrets!) I-5 bridge bicycle map at the following link:

I’m all over the trip to the Van! Just saying I don’t want to spent my grandchildrens’ inheritance on a stupid bridge to get a fancy new bike lane, is all.

I think I’m more shocked by the fact there were only 15 people in cars that died in 2008. In the entire city? It seems like you hear about fatals every couple days. I supposed rural two-lane highways, outside of Portland, are more dangerous than moderate speed streets, and interstates, inside of Portland.

I’m actually more curious to know about what we can learn from the non-fatal crashes, which I’m pretty sure are still relatively common

2007 MVA deaths from the NHTSA

The human body evolved around a particular maximum speed limit, above which we’re not capable of sustaining impact without serious injuries, and not able to take sensory input and react quickly enough to avoid those impacts. That speed is the fastest speed we’ve been able to achieve throughout 99.99% of human existence, i.e.; as fast as a healthy adult can run downhill.

That’s about 20mph. You want to reduce the 40k/year deaths from cars in this country to a less horrific number? Make that the national speed limit. I’m only half kidding.

Go tell some fighter pilots about your ‘sensory input’ and reaction time hypothesis. While you are at it go do some reading about all the head trauma sustained from simply falling on ones head from a standing position. No extra velocity is needed. I know a woman who spent 2 weeks in the hospital after simply falling from a bicycle she was dismounting in a parking lot.

I agree we should lower many speed limits, but your reasons for doing so are borderline ridiculous.

Fighter pilots’ abilities to do what they do has as much relevance to the average person as the ball-handling abilities of NBA superstars. They’re a highly selected group of individuals whom the military spends millions of dollars each to train, and they perform at the level they do for a relatively short time in their lives.

I’m sorry about your friend, but she’s what is known as a statistical anomaly. Sure, people get injured below the human speed limit, and people survive collisions above it. But the overwhelming data show an inflection point of rapidly increasing serious injuries and deaths at 20mph.

And, seriously, what’s so ridiculous about my theory? (Not my theory, either. I read it in some traffic theory literature.) Evolution, while continuous, operates on a long time scale. The human brain gained powers to create technologies that then snowballed into an environment that the human body is unprepared for. We manage, but we die in large numbers, because we’ve never needed to survive in a world such as this until very recently.

As for the practical implications of the 20mph speed limit, it makes sense in all neighborhood streets, and most places where cars, bikes, and pedestrians can come into contact. It puts us all on an even footing.

David Hembrow (http://hembrow.blogspot.com) has a number of posts about how, in the Netherlands, when they have areas where cars and bikes/pedestrians have to interact, they generally have dramatic traffic calming measures to make sure that automobiles are driving at safe speeds around others. Even on country roads where bikes share the roads with cars, they set speed limits at around 30mph, because they know those roads are used by bicycles and they want it to be safe for them.

I was just looking at some stats on portlandonline.com the other day, showing that the risk of serious injury in an automobile/pedestrian collision at 20mph is something like 10%, at 30mph it’s something like 50%, and at 40mph it’s more like 90% (that’s just from memory, I didn’t re-check them, but the increase above 20mph is dramatic, and the percentage at 40mph was in the 90% range).