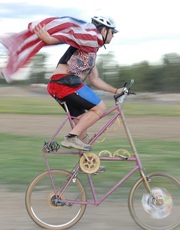 Have no fear, bike hero is here!

Is there someone in a mask, riding around Portland offering help to bikers in need? According to a message on the Shift email list last night, there just might be:

“Hey, does anyone know who this “bike phantom” character is? I was riding on NE 33rd last night and got a flat, and this good Samaritan wearing a mask stopped to help. I didn’t even get to ask, he just knew. I asked for his name and he just smiled. My friend said he was almost mugged while riding home and a similar character came to his aid. sounded like the same guy because he described the same all black bicycle.”

Another person replied with more information about the “black biker”:

“I heard about this person from a couple who said they were escorted by the “black biker” on the esplanade after being hassled by drunks that were hooting at the woman while walking down the East Bank. It rang a bell because they mentioned the mask – and said at first it was startling.”

Has anyone else out there seen this masked avenger of two-wheeled courtesy?

Eugene SRTS has a Bike Phantom… though he doesn’t make it up to Portland much =).

Maybe Batman is catching the drift of things and ditching the motorized vehicle for a bike.

Yawn. Tulsa has had a bike super hero for YEARS. He’s still going strong with an upcoming movie, several run-ins with rogue cops, and a crazy stalker impersonating Santa.

Could it be this guy?

This story makes me cackle with pure delight. I hope it’s true.

ya, one day my frame snapped in half downtown and this guy in a kato mask wheelied up and welded it back together with a small torch he had in his belt and then just pedaled off into the unknown before i could say thank you…

What? a kato mask and he welded your bike back together? Wow! is he single?