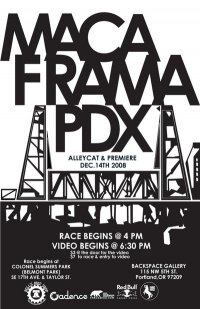 Macaframa, a movie about the culture around urban fixed-gear/track bike riding, will premiere in Portland on Sunday.

Prior to the event, organizers will host an alleycat race that begins in Southeast Portland at Colonel Summers Park (20th and Belmont) and ends with the screening at Backspace (115 NW 5th).

I have to admit, I don’t know much about Macaframa, but a few friends say the film is very well-made and the riding is amazing.

If it’s anything like the fixed-gear stunt riding I saw on the Esplanade back in March, it’s definitely worth watching.

Here’s what one of my Twitter followers, track_stand, says about it:

“Macaframa dudes are awesome. Their premieres have been packed. Look out for some amazing track bike cinematography.”

Check out the trailer (thanks to Bjorn for the link):

— Learn more about Macaframa in Portland on their Facebook page.

Its supposed to snow Sunday. Making for a very interesting alleycat.

Good thing this is on bikeportland.. now the police have all the info they need. Jon, you are a fool.

Thanks for the shout out Jonathan. Hopefully the alleycat is over before the trolls find out about this post and start discussing the “hipster” problem in Portland.

Did I miss the memo? Last time I checked, riding track bikes and watching films was legal.

At any rate, I am excited to see one attempted in the snow!

Street racing without a permit is definitely very illegal.

The best alleycats are messenger thrown, and barely advertised beyond word of mouth. racing with your friends is the best.

Racing with random fools is dangerous.

This screams of a Fixster race anyway….

Break out your Tarck Bike….

Looks like BMX trick videos, skateboarding vids, or whatever, just on fixies. Am I missing something? I don’t get it. Cool factor is all.

come on, anonymous, where’s your sense of sport? ditching the cops will add to your rebel mystique.

their facebook page & flyer have been out for a while & give the time & location….it’s not like any authorities really needed bikeportland.org to figure out where to go if they wanted to.

AP – I tried this one out, and I think the smash mouth suited it better . . .

Or maybe they got a permit…

…plus if you ride it like you stole it theres no rush better, I should imagine even with cops after u! I look forward to watching this

BikeSnobNYC put up a pretty good review in the 2nd half of this post:

Yes Sadie, people are doing tricks on fixed gear bikes…again…just like in the late 1800s.

I bash people on the internet for fun!

But really, I plan to go at this, I wanna try to ride in the snow. FYI this event isn’t Track bike only. Several people will be busting out their cross bikes, road bikes, MTB bikes, etc etc.

AP – Nothing “goes better with a Céline Dion soundtrack”

Tricks on a fixed gear bike? If something is semi-difficult but looks completely lame, should we still appreciate it? Watch some BMX videos… ya know, guys doing ridiculous tricks that are about 1000 times more ballsy than a bar spin. I think these guys said it best….. http://www.youtube.com/watch?v=b2885aR6o6s

I heard a few people at the movie making fun of it. I had to wonder if they’ve ever ridden without a handbrake in San Francisco or Seattle, if they know what that’s like, and how potentially dangerous it is, even if you’re experienced.

I agree that people are pulling some insane stuff on BMX bikes, but Bob Haro was doing endos and rockwalks in 1979, so that’s 29 years for “Freestyle BMX” to progress. Go watch some Freestyle BMX videos from the 80’s, it’s cool but by today’s standard “lame”, all rough and choppy, and fairly easy. It’s true that “Artistic Cycling” has been around for 100 years but I don’t think that is the influence of “Fixed Gear Freestyle”.

People are having fun ON THEIR BIKES. That is always going to be way cooler than standing around with your bike locked to a pole.

SkidMark, most of them were drunk.

I don’t ride a fixie and don’t do tricks (I only recently learned to ride with no hands, I feel pretty fancy), but why the hate?

I fear injury too much to try some of that stuff, but I love watching other people do fixie tricks. Takes practice and guts, y’know?

Colin Arlen (Macaframa) said this in an interview in Fixed Magazine:

“When there aren’t hills to bomb in a suburban city there is going to be a different pressure on bikers to do unique different things on their bikes to improve themselves and the culture
in general. BMX has such an impact on track bikes nowadays that it’s hard to see it going any other way. I don’t think anybody in SF is going to adopt that style of riding which I think is good because it diversifies the sport and the art of riding a track bike. My only wish is that people can respect all sorts of riding styles and continue to do their own thing and stay creative and persistent while bringing track bikes into a positive light. I don’t want us to just be referred to as a bunch of fixed gear hipsters riding their fashion accessories. It will take a lot of effort by the whole community to create
a subculture as “cool” as skateboarding, and I hope Macaframa has a positive impact on the track bike culture.”