More of what’s in store for BikeCraft IV

BikeCraft IV is right around the corner and we’ve got a fantastic line-up of new and returning vendors you will not want to miss.

Since we last profiled several of this year’s confirmed BikeCraft vendors, more creative, bike loving folks have stepped up wanting to share their wares. 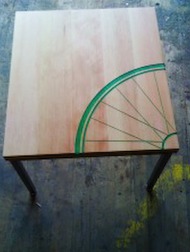 Fir table with wheel motif by
Bren and Kris Reis.

Travel in style with a set of locally
made panniers by Black Star Bags.

And one last thing — bring your quarters! With all this talk about a bike tax, impending economic doom, shortfalls at PDOT, etc…, we’ve called on some local kids who will be holding a Bake Sale for Bikeways. All proceeds will be kept securely in a coffee can to be delivered to City Hall after the event. Buy a brownie, build a bikeway!

I know where I’m doing my Christmas shopping this year.

I haven’t seen it mentioned anywhere– maybe I missed it.

Do you know if any vendors plan on taking credit/debit/check?

Brian, thanks for asking. Cash really is best — fortunately, there will be an ATM on-site this year. Some take checks as well — it’s always worth asking.

Unfortunately Wood-Craft-Lawn will be unable to take anything other than cash, so if you want to buy the first ever Filmed by Bike t-shirt or the new Greatest Hits DVD, or any of the other very cool offerings our group will have for sale, bring those DOLLARS!

where do i sign up to be a vendor? does it cost anything?

Queen Bee will be accepting cash, checks, and credit/debit cards at the sale.

1.by.liz will also be accepting credit cards at the event.