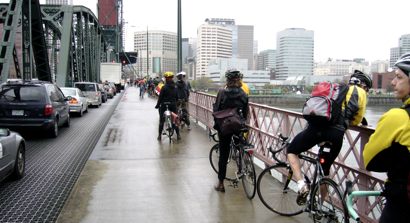 Bikes as far as the eye can see. They got backed up during a lift of the Hawthorne Bridge leading into downtown Portland on Tuesday morning.
(Photo: Ian Stude)

The photo above was taken by reader Ian Stude who got caught in a huge back-up of cyclists on the Hawthorne Bridge yesterday. They were stopped on their way into downtown Portland due to a bridge lift at about 9:00 am.

Here’s how Ian described the scene:

“…the Hawthorne Bridge saw a huge traffic jam of cyclists today… When I came to a stop I was probably half way between the start of bridge (by the firestation on the east side) and the lift span. I snapped a quick photo of the long line of bikers and walkers in front of me [image above]. Within minutes…many more cyclists began to queue up behind me.

By the time the bridge finally came down, there was a line of cyclists at least 2 abreast stretching from the lift span all the way back to the firestation. It was awe-inspiring! I noticed several other people dismounting their bikes and looking at the long line of us with big grins on their faces… What a site, indeed. And just another day in BikeTown, USA.”

I too have noticed bike back-ups during my daily commute. The other day, at the bike traffic signal at N. Interstate and Lloyd, there were 15-20 cyclists bunched up at the light.

I can only imagine what will happen once summer finally arrives…

I remember during last September I was coming back across the bridge (eastbound) when the bridge got lifted and we were there for about 10 minutes. I stopped counting cyclist after I reach 100 and there were plenty more. What a beautiful city.

Sometimes, when I see the Hawthorne bridge going up while I am still on the Springwater-Esplanade, I try to race up to the Steel to beat that bridge\’s closure. Sometimes I make it, sometimes I don\’t. If I don\’t, I ride back down to the Hawthorne, and it\’s usually back down by the time I get back there. It\’s like a fun game bridge chess – which one gets you across fastest?

girl on a bike

It\’s hard not to be a little jealous when I see that! Even though most of my morning commute takes me south through SE, I just don\’t see that kind of bike traffic through most of the year until it starts getting nicer. It gets a little lonely out there in the winter! But last week I was at the bikebox on Clinton and got excited when five cyclists piled up on my side of the street, and another handful were waiting across the street. Come on out of the woodwork, everyone. I hope everyone who gets to see this sort of thing on a more regular basis enjoys it and feels inspired.

now if we could just get the majority of them to actually stop at stop signs and red lights….life would be perfect.

Check out the graph!

I forget how many cyclists are in this city. When I ride I normally come in from Vancouver prior to 6 AM and am lucky to see five bikes in the entire 15 miles.

Also, keep in mind that the bridge count is inaccurate because it doesn\’t account for the scuba divers

Even when it isn\’t rush hour, and it\’s winter I almost always have a huge count after a bridge lift. I wonder what the count would be with a Flanders street bridge.

Well, I have noticed that this winter 2008, in sideways rain, there seemed to still be big groups of cyclists waiting at the lights. where as last year in really poor wx there seemed to only be a few.

Schrauf, I\’m with you… I pedal in from Vancouver and arrive in Portland by 7AM. Wish I could be one of those folks in the photo… 9AM sure sounds nice.

remember 19K is only the estimated ridership over the Hawthorne…there are other bridges in town and there are folks who don\’t commute across the water both East and West….
30K is easily attainable..

This is an absolutely great site to see. Especially since it was a wet day and we all know that the crowds mainly come out for the nice weather. But just as an additional note (in case any readers aren\’t aware), if you\’re at the front of this line and you see the bridge going up, check the river and see what\’s raising the bridge. Depending on which direction it\’s going and how close it is to the bridge, riders can turn back to the East Side Esplanade and bomb it to the Steel bridge to beat what ever it is that\’s raising the bridges. This isn\’t too wise for people going south of the Hawthorne but it works well for those heading north after crossing the Hawthorne.

Once again – this is great to see. I need to stop being so selfish with some of my riding frustrations. I always enjoy these sites but I can easily get frustrated when I commute year-round and don\’t have traffic jams until the nice weather comes out, hehehe. It makes me miss the cold winter, snow-covered days. Everyone should just bike everyday!!!
-Jose

I\’m in the early am group with Bryan and Schrauf, starting from Gresham at 5am. I rarely see more than 10-20 vehicles on my way in (who knew heaven was Burnside at 5am???) but it amazes me that on the rare occaision that I get a bridge lift that early, there always seems to be about 10 bikes in the backup. Awesome!

I don\’t think the bridge counts are estimated. The report says PDOT lays down 24-hour, pressurized hoses to do bike counts on the bridges, or extrapolates that data.

Bike either eastbound or westbound on your commute home this evening, and you will see those hoese out on the Hawthorne right now!

i agree with the envy theme. from SE to Milwaukie is super lonely. Just dodgeing the suvs and buses keeps me entertained though but it would make me really pumped to see a bike backup anyday on my run.

Glad you were there with a camera, Ian. I was in the lineup wishing I had one. Someone in front of me even asked whether \”the bike people staged this for a good photo.\”

I was apart of this jam yesterday. You never really see how many people are using the bridge until something like this happens. Normally it\’s just a steady flow, 5,10 bikes within sight at a time. Made me feel like I was getting to be part of a race.

Now if only we\’d see those kind of numbers in the middle of the winter (speaking as a seasoned veteran, of course…)

Ian, I didn\’t realize you were on the bridge too. It was a great sight to see. It seems like there are a lot more daily commuters during bad weather than a year ago. The bike racks at PSU are constantly full no matter how nasty the weather is.

Stripes (#16) got it pretty much right, the bridge counts are actual 24-hour hose counts, not estimates or projections.

Also, as much as i love getting caught bythe occasional bridge lift — what could be more quintessentially Portland? — it\’s good to have filed away the fact that they don\’t (generally) do lifts until 9am, post-rush-hour. These lifts often happen right after 9am because the bridge lift span needs the exercise (no joke).

I was there when the bridge was being lifted. Amazing to see all the people. I wish this project would get underway. This trail would really encourage people to get on bikes. http://www.sullivansgulch.org/news/trails.asp

I love to see the high ridership but I can\’t be the only person who thinks that the Hawthorne Bridge lift sequence, esp. the timing of the gates (not the span itself, I know it\’s old) is overly conservative. I\’d like to see those gates go up and down a lot faster. As it is now, there\’s some kind of overly conservative sequence that seems to add needless time…

Safety be damned! Let the people be responsible for their own actions and stop trying to protect us from ourselves!

I\’ve been a full-on bike commuter for about 6 years and I\’ve definitely noticed more commuters shrugging off the rain and cold over the last 2 years. I used to enjoy the empty bike lanes all winter. Now I enjoy it more to see my fellow cyclists out in their neon.

This is a great post! Has anyone seen all of the bikes that have been parked over at PSU? All of the racks are full! Someone really needs to snap a few pics – and get the University to add a lot of new bike racks.

I remember years ago when I was in Eugene, and they practically doubled the number of bike racks on campus. Double rows, each side of the no-car street (13th ave), stretching for like 2 or 3 blocks. Hopefully Portland can do the same!

Commute/community envy is right. Try Sellwood to Gresham/Troutdale for a lonely a.m. ride. I know of only two other people who ride east OUT of town to go to work.

Thanks for posting this, Jonathan. I only wish I would have snapped a more artful photo… maybe next time.

zilfondel – Thanks for the PSU shout-out. We are definitely stacked with bikes these days — and we have over 400 bike racks on campus! I\’m happy to report that we will soon begin installing more, possibly up to 100 new racks this spring.