Auditor’s survey shows how your neighborhood rates for bike safety 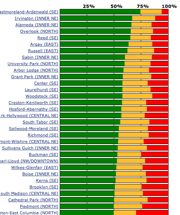 See how your neighborhood stacks up.

The City Auditor’s office has just released neighborhood by neighborhood breakdowns of their 2007 Portland Resident Survey (I shared a preview of those results back in December).

The Portland Residents Survey is a useful tool that allows you to rate how neighborhoods stack up against each other based on a variety of specific livability issues. Over 20,000 randomly selected residents from 75 neighborhoods took part. They answered questions about everything from the quality of garbage service to how safe they felt in local parks.

Among the questions asked was:

In general, how do you rate streets in your neighborhood on safety of bicyclists?

The highest-ranked neighborhood was Eastmoreland-Ardenwald in Southeast Portland with 75% of residents rating bike safety as “good” or “very good”. The top five was rounded out by the Northeast neighborhoods of Irvington and Alameda, followed by Overlook in North Portland and Reed in Southeast.

The bottom of the bike safety scale was (not surprisingly) dominated by neighborhoods in Southwest Portland. Four of the bottom five were from Southwest with over 50% of Arnold Creek-Marshall Park residents giving bike safety a “bad” or “very bad” rating.

The ratings for pedestrian safety had similar responses.

For more results of the Portland Residents Survey, use the Auditor’s interactive website to view by question or by neighborhood.

Wow, other than the hilly SW neighborhoods, safety seems to roughly equate with property values. Surprise?

And also it seems higher safety ratings in neighborhoods where there are more cyclists.

The survey merely shows some people\’s opinions of bike safety in their area which may or may not have anything to do with the facts.
It would be interesting to see actual traffic safety data.

I recently received a mailer from South West Neighborhoods Inc telling me we NEEDED improved bicycling and pedestrian ways in my neighborhood. Who decided that we NEEDED it? Sure it\’d be okay but I live on and ride every work day of the year to downtown on one of the roads in question….I sure don\’t think we NEED it.

If somebody else wants it then they can pay for the up front costs of land and the imporvements. There are better improvements to be made IMO.

Same neighborhood is listed as about 33% unsafe bicycling on the above. Meh, I\’m good with the way it is – count me as the 33% ranking it as good.

So you\’re in the minority then.

Aaaarrrrgggghhh: Am I? Who knows? The letter didn\’t really say how many people agreed that Sam Adams\’ plan for localized taxes paying for immediate neighborhood improvements – could have simply been the 10 or so people on the SWNI board who \”decided\” for us all.

As for the survey results – no, I\’m right in there at 33% with the safes, not safes, and neither safe nor not safes. There is no majority…