This article was written by Carl Larson.

A nearly ubiquitous presence on the Portland bike scene, Carl’s done everything from delivering bike maps as an employee of the City of Portland’s Transportation Options division, to working with the Regional Arts and Culture Council on the Zoobomb Pyle art rack project.

Few people move between Portland’s many bike clubs, organizations and sub-cultures with as much panache and dedication as Carl.

In this article, he shares a heart-warming story of tragedy and triumph within the Zoobomb community.

“I took one hand off my handle bar to scratch my nose…and I crashed.”
–Jay

Just one event remained, the “Mountain Bombtastic.” It would be an epic bomb down seven scenic, steep, and twisty miles of Seymour Mountain Road (check it out on Google Maps). 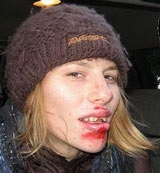 After a hangover-erasing brunch and some intense bike polo, a crew piled into pickups and rented minivans with minibikes piled high inside and out. The first run was flawless with many riders averaging 35 mph, grins stretched wide across their helmeted heads.

Right from the start, though, the second run didn’t go so well for 24 year-old Jay Hasty.

According to Jay, “I took one hand off my handle bar to scratch my nose, and I guess I was going fast enough to get the speed wobbles…and I crashed.”

As a Zoobomber, Jay is a relative newcomer, but she’s no stranger to bicycles (she recently sold her car). It was simply an inopportune time to pick her nose. It was broad daylight, she was wearing a helmet and she doesn’t blame road conditions or drinking (both Jay and the road were dry).

It turned out to be a painful and expensive mistake.

“I hit teeth first…” she says, adding that her lip-ring also got ripped out in the crash. The bottoms of her two upper front teeth were gone, leaving the nerves exposed. Jay’s comfort with blood — she is a blood analyst for The Red Cross — was made clear as she joked with her pals en route to the hospital.

“I kind of miss the old fangs, you know, street cred and all…but now I can bite harder, which was one of my favorite fighting techniques that I was beginning to miss.”
–Jay

Rather than feign Canadian-ness in hopes of receiving free health care, Jay fessed up to being an uninsured American. She was relieved to find that the emergency room bill (including temporary caps for her teeth and some very necessary painkillers) was only $500. That wasn’t the last bill she’d see, though. By November, Jay’s distinctive new “fangs” were a familiar sight for her friends. The caps on her teeth had crumbled and even with the generous sliding-scale pricing offered by Laurelwood Dental in Portland, she was looking at another $500 bill.

To help her pay the bill, friends and fellow Zoobombers began to talk about a fundraising party.

The evening started out early with folks quietly working away at art projects (painting, drawing, carving…), but soon after Handsome Dave unleased a donated case of vodka, the crowd grew larger and louder. Before long, barely-clad Zoobombers were auctioning off everything in sight.

According to Jay, “An unfinished painting of mine that I wasn’t even planning on selling was just sitting in the room and Coach Dan picked it up and started auctioning it off.” To her delight, “Dogeye bought it for 30 bucks.”

As one might imagine, the art wasn’t conventional (and some of it wasn’t even very good.) Jay recalls that, “Sauce wrote ‘Farts are funny’ on cardboard and sold it for $7.” 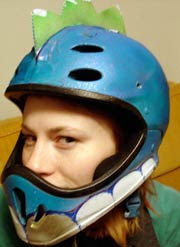 The spectacle of the evening was the auctioning off of real live Zoobombers for “One hour of work…or a date.” Some touted their bottom-bracket lubrication skills while others flouted their bottoms in an outrageous display of love for their flattered, toothless friend.

By the end of the evening, Jay’s grinning gratitude had turned to overwhelmed embarrassment. “Going around the party, there were stories of others in need, probably even more (than me),” she explained, “and when (the party) started to appear to be almost too much of a success, I felt like it shouldn’t be all about me.”

Jay was floored by the generosity of a group frequently stereotyped as destitute freeloaders. Lead auctioneer Coach Dan wasn’t alone when he said, “I was touched by the zeal and compassion displayed by the Zoobombers towards their injured comrade.” 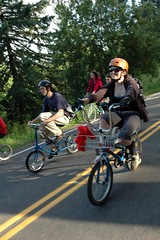 Having paid half of her dental bills already, this was considerably more than she needed. After considering a few options (Zoobomb injury fund?), she settled on donating the balance of the evening’s profits to Leo Westwind, the 12 year-old bike event regular who is battling a genetic liver condition (Update: Leo has received a new liver and is recovering in Seattle).

Jay was quick to get her teeth fixed before the holidays, “My mother warned me that if I came home with teeth missing to see my grandmother for Christmas, she would be ‘Extremely disappointed,’…I did not want to scare my grandmother.”

For the most part, Jay’s very happy to have her teeth back, but she’s quick to point out, “I kind of miss the old fangs, you know, street cred and all…but now I can bite harder, which was one of my favorite fighting techniques that I was beginning to miss.”

As one of the Canadians responsible for taking Jay up the mountain, let me say how glad I am that this turned out so well, and so fast.

Yeah! I couldn\’t believe the amount of money people gave out and how much fun they had doing it! A few years back, Emy from the sprockettes and Show Me the Pink, lost her front teeth, and she held \”Emy\’s Grill\” a bbq party that raised her $600. Gotta love the community here…

The local hoons in vancouver, Project B, put up a video of the seymour bomb:
http://projekto-b.blogspot.com/2007/10/weakend.html

That might be my favorite dental related bike story ever. Nice work Zoobomb.

Giving someone back their smile?…

\”Jay was floored by the generosity of a group frequently stereotyped as destitute freeloaders.\”

two lessons here:
1. stereotypes are often wrong
2. those with the least to give, often give the most – wait that\’s not a stereotype is it? 😉

the amount of generosity shown by our friends that night was astounding. I was on the trip to Mt. Seymore where the teeth were lost, and was part of the approximately 8 people who waited in that Canadian hospital until miss jay got herself all checked out, and let me just say, it was great to see her get this all taken care of. zoobomb constantly impresses me with it\’s sense of community, and it makes me proud to call it my premier portland bike club.

oh, and just a quick note. I believe the count for the Velomutations field trip was closer to 50 people. 😉

Yes, it was a fun night, and I still owe Dutch an hour of \”services.\” Always good to see a community pull together.

Like I say, Open Source technology and bicycles go together like fun and friends. They are great on their own, but better together.

sad that healthcare is so un-affordable, but rad that people are awesome and willing to help each other out! yay.

I love you guys! I have never been a part of such a supportive community. Good thing I\’m not Canadian because then the party wouldn\’t have been as rockin!

Thanks Carl- love the article

I must give a thanks to everyone who was still up in canada when the crash happened and stepping it up when it was most needed. Unfortunately I was on my way home at that time. You guys are amazing!

Help Wanted!
How can I get a helmet like this made? My 10-year-old son, aspiring competitive cyclist, recently lost teeth, needed lip stitching in a training accident. I have looked high and low for something he can ride in that is SAFE. I need to help my son physically and psychologically heal. But I can\’t let him ride until he has something that will protect his face.
Any advice appreciated, I have seen motorcycle helmets and some flimsy things, but nothing like this appropriate for road racing.
Keep up the great work!