I’ve read what he’s uncovered so far and I find it fascinating. Given how much bicycling is woven into the fabric of Portland, it’s exciting to learn more about this rich part of our cultural heritage.

One focus of his research is uncovering details about a former “Cycle Park” that used to sit in Sullivan’s Gulch, just east of what is now the Lloyd Center.

I’ve asked Lundgren to share a snippet of what he’s learned so far. The following excerpt is about how the Cycle Park came to prominence and how a tragedy led to its demise… 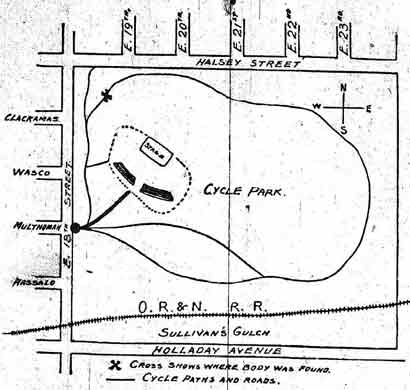 In 1897 W.F. Nelson leased a tract of land from the Glisan family, Sisters of Providence Hospital, and several others. He was looking to east coast amusement parks – but was a little too far ahead of the curve. This was just a few years before amusement parks at Council Crest and Oaks Park. During June of 1897 he built a fenced amphitheater with a bandstand, ticket-window, and bicycle paths.

On Saturday, July 3rd, “Jack the Giant Killer” opened for a run of several days over the weekend of the Fourth. It featured “up-to-date bicycle turns” and trick riding,” as well as a “ladies military band,” “sailors drill,” “sword contest,” Scottish highland dancing, “fancy roller skating,” “tumbling,” a “skirt dance,” “horseback riding,” and an “Indian war dance,” the newspaper noted.

This entertainment marks the beginning of a series of similar shows, which will be given at Cycle Park during the season….Big spectacular shows have become the fad all over the United States….At Staten and Coney islands, below New York city, it is not an unusual event for 20,000 or 30,000 people to attend one of these big shows…

This was not the only event. The Fourth of July weekend attracted other bike fun. That same day there was an announcement that “it has been decided to postpone the grand bicycle parade, which was to have been held Saturday night, till Tuesday, July 6. It was found necessary to do this owing to the difficulty of properly decorating and illuminating the wheels…”

Much like today, Portlanders at the turn of the century had a thriving bike culture.

Sadly, the big spectacular shows didn’t pan out. The next year, Nelson was in financial trouble, and some of the owners denied that they had in fact leased land to Nelson. The big shows ceased. Neighbors and bicyclists continued to use the park, however. It was not uncommon for couples and groups to visit the park late into the evening…

By the following summer things had changed. It was an awful mess.

On July 20, 1899, a man by the name of George Arnold was walking on a path the newspaper said “that had been used probably last year, but not frequented this summer.” Not far from the path he found the body of a young woman. Her name was Claire Fitch. For a week this was headline news. The coroner determined that Fitch had been murdered and on October 24th, a grand jury indicted her sometime boyfriend Frank McDaniel. From Thanksgiving to mid-December, the trial made daily headlines. The city was transfixed…

The city seemed to want to forget. Not even a year after a conviction in the case, the Glisans made plans to develop Cycle Park. On November 8, 1900 they filed plans with the City of Portland for Wasco Addition, and on November 17th, City Engineer William Chase approved the addition. The date of the oldest house still standing I’ve found is from 1902. Today much of the land is zoned for multifamily dwellings.

Infill will continue to change the area. But perhaps now enough time has passed that we remember Claire Fitch and Cycle Park.

Lundgren is also delving into the history of Portland first police bike patrol and how our network of bicycle paths looked circa 1900.

I’ll share excerpts from these topics in the weeks to come. Stay tuned…

And also how about the colourful history of the local bike messengers and delivery agents and military corps (Vancouver Barracks).

Rest in peace Claire, and 10 blocks of Holladay Street, too.

sorry to help hijack thread,
but here\’s another on bicycles and women\’s liberation:

Eric:
There\’s a great book about two California teens who spend their first summer after high school riding their bikes up to Seattle. Set in 1909, there\’s a section that deals with Portland as they pass through. There might be some useful information for your book about Portland and bikes in that section.

The book is published by the OSU Press and it\’s called Two Wheels North. Info at
http://oregonstate.edu/dept/press/s-t/TwoWheels.html or
http://tinyurl.com/2koklv

The book is available through the Multnomah County Library.

Thanks for the references! If you think of additional ones, please don\’t hesitate to share: fortunaerota [at] g[ee]mail [dot] com.