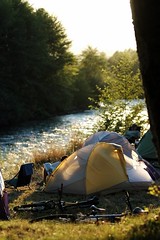 Camping on the banks of the
Middle Fork of the Willamette River.
(File photo)

The quality of riding in Oakridge can be illustrated in many ways. One of them is by the success of Mountain Bike Oregon.

The first MTB Oregon was held in 2005 and was attended by 38 hearty soles. Founder Randy Dreiling says there were more guides than riders. It didn’t take long for word of the event to spread. Word of mouth, propelled by popular Internet forums like MTBR.com saw the next year’s attendance balloon to a sellout crowd of 300 riders.

Riders came from 20 different states including as far away as Maine and Florida.

This year, organizers decided to split the three-day event to two sessions. 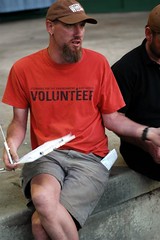 The vision of MTB Oregon came from Randy Dreiling, who had dreamed of such an event since the early 1990s. In 2004 he connected with Porter Childs from the Portland-based event company Good Sport Promotion.

It only took Porter a few hours of riding in Oakridge before he was hooked. The idea for MTB Oregon was fleshed out that same night.

Dreiling has been an ardent advocate and supporter of mountain biking in the Oakridge area for years. He’s on the Chamber of Commerce, runs a mountain bike guide service called Oregon Adventure, puts on the Oakridge Fat Tire Fest, and much more. 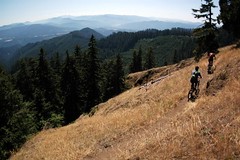 Dreiling says MTB Oregon couldn’t happen without the support of local mountain bike club, The Disciples of Dirt (DOD). They maintain hundreds of miles of trails and they provide guides for all the rides.

With the work of people like Randy Dreiling, great events, and the sweat equity of the Disciples of Dirt, it won’t be long before Oakridge is on a very short list of mountain bike meccas.

For the latest photos from Mountain Bike Oregon 2007, check out the gallery.

Typo in the 3rd to last pp.

Great photos, Jonathan. Looking at this event, the cost is $300 for two days of riding!!! It looks like the shuttles are additional costs as well. This makes Whistler look cheap. Wondering from people who went if this was truly worth the cost?

It\’s THREE days of riding, all shuttles are included*, three meals a day, camping, FREE beer garden on the two nights, showers, clinics, mechanical support at the camp, fruit bars and other energy snacks all day long, trail guide booklets, people to guide you on the trail, staff at the info booth to answer questions all day and more. All that is included in the price, and early birds who registered back in December got an excellent price break for planning ahead.

Paid rides aren\’t for everyone, but for people who want access to trails they might not otherwise discover, with the support of people to show them the way and to not worry about meals and accommodations throughout the weekend, Mt. Bike Oregon is an awesome all-inclusive getaway.

* The shuttle to Middle Fork is an all day affair, further away, and there is a fee for that one trail.

Thanks Team MBO,
I love bikeportland.org, because it let\’s real bike riders express their opinion. So I was wondering what people who actually went and paid thought of the event? Was it worth the cost? Add up the low cost of camping, food and a few beers and this is still way short of $300. So I would love to hear from people who went to the event.

Oakridge is chalk full of the best mountain biking trails you\’ve ever seen on the west coast and its well worth the the efforts of a weekend getaway of great two wheelin\’ in the trailheads above Oakridge and overlooking the Cascade Mountains.

Randy and his team has put on a world class event for three solid days of fun, while mt. biking and the memory you leave behind from Oakridge will be an everlasting adventure you can share with your kids, grand kids and all – but the addiction is real, it will keep you coming back for more!

Come on up and join the fun.

For a mere 3 c-notes, you get three days of riding, shuttled up to the top of some of the most awesome trails anywhere. Great food, beer, clinics all in a clean hospitable environment. The best part are the people!!! The guides are excellent. Nothing like riding till you are so tired, you sleep like a baby [next to a river no less].

Good to hear MBO is sold out. My wife and I were two of the original 38 the first year and it was a blast. Haven\’t been back since due to work/scheduling/life. I definately plan to return in the future.

Swing by the PUMP meeting tonight, get a first hand review of what a bunch of our members thought about MTBOR. 7:30 PM
Lucky Lab 915 SE Hawthorne. Sounds like they all had a blast! Too bad the August edition concides with the Tour De Fat: Auagust 18th, Tom McCall Waterfront Park, bicycle parade is at 11, party starts at Noon. And this one is free!

Super great, they took care of the details and I rode. Perfect.

Anyone who worries about the cost of 3 days and 3 nights of fully catered mountain biking indulgence doesn\’t get it. Sure, you could go it alone and save some dough, but that\’s not what MBO is all about. It\’s about leaving your cares behind and leaving the planning up to the organizers. Just show up with your bike and let them do the rest. This way, you are completely at ease and can really enjoy a steady diet of riding, camping, and hanging out with friends.

The trails are some of the best you will ever ride: smooth, technical, fast, gnarly, steep, scenic, well-maintained, foot/horse/motorcycle free, remote, wild, close and accessible, etc. I\’ve never been a shuttle guy, but 60 miles of gravity driven single-track in 3 days later, I\’m hooked on MBO\’s program. It\’s one cool, unforgettable weekend. Bring a group of friends, escape, and enjoy the hospitality!