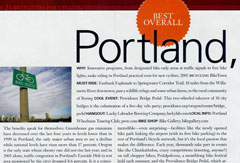 A few months ago I got a call from one of the editors at Bicycling Magazine. We’d met at last year’s Sea Otter Classic and I of course went on and on about what’s happening in the bike scene up here. I told him about everything from wonky ridership stats to Chunkathalon, Bridge Pedal, and everything in between. I wasn’t sure what he’d do with all the info, but I guess he was duly impressed because they named Portland “Best Overall” cycling city in their March issue.

Along with a nice one-page write up, there’s a photo spread that features a shot of the River City bike people, the Eastbank Esplanade, Powell’s bike rack, and Veloshop owner Molly Cameron. They even made mention of my BikeCraft event and the bike moves Shift has made happen.

I know Bicycling isn’t exactly everyone’s favorite magazine, but we could use the good PR right now.

read the article and passed it on to others.
half tempted to pick up the actual mag.

I’m jealous. I’m an everyday bike commuter in the worst city in America for bicycling, Atlanta.

I think the worst as far as statistics for deaths is Florida.

I am in St. Louis. It is slowly getting better for cyclists but nothing like what they have in Portland. I am envyious too!

I hope the local media publicizes this well so Portland drivers know about it too.

ride with pride
praise the commuter

The term “chunkathalon” is getting entirely too much currency as of late.

I feel for you. I’m from Atlanta as well. Moved to Portland 10 years ago for the bike culture. Never looked back.

maybe I missed the link up above, but how do I actually read the whole article–other than the graphic of the first page? I’d like to read it online and pass the article link on to others…

Scott, the link above is only to the Portland part of the article. Here is a link to the entire article as a PDF.