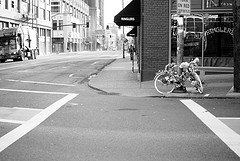 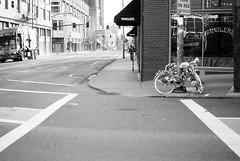 There’s a ghost bike right outside
the McMenamins on W Burnside —
so why would the company stall a bike
safety project?
(Photo © J. Maus/BikePortland)

Some people in the community have reacted strongly after seeing the name of McMenamins General Manager Christopher Robbins on a letter calling for the halt of a PBOT project to improve bike access on SW 12th Avenue in downtown Portland. Frustrated that the project is stalled indefinitely, some have fired off emails to Robbins and I have seen the word “boycott” pop up in comments and on Twitter.

It’s easy to see why McMenamins — operator of many popular pubs, breweries, and hotels throughout Oregon — is a target. Not only did they support a letter that questioned the need for improved bike access on 12th, they also have an entire page on their website about how bike friendly they are. Making matters worse for some is that 17-year-old Tracey Sparling was run over by a truck and killed in October 2007 while waiting for a red light right outside the door of a McMenamins pub on West Burnside and 14th.