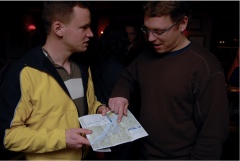 Our first Neighborhood Get Together, in St Johns last month, was a lot of fun and a definite success.

To keep the wheels turning, this month we’re headed to Southwest Portland. Come join us on Tuesday, March 3rd from 5 to 7pm at the Lucky Lab in Multnomah Village, at 7675 SW Capitol Hwy. 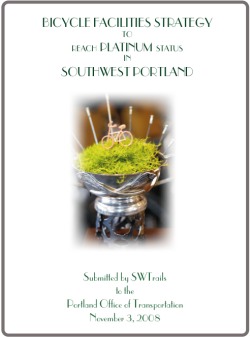 A major effort to bring the quality of biking in Southwest Portland up to the standards of the rest of the city has finally landed on PDOT’s desk.

SWTrails — a subcommittee of the Southwest Neighborhoods, Inc. — has submitted a 65-page plan to PDOT titled, Bicycle Facilities Strategy to Reach Platinum Status in Southwest Portland.

According to Keith Liden, a citizen activist who spearheaded the effort and who also sits on PDOT’s Bicycle Advisory Committee (by day he’s a professional planner with Parsons Brinckerhoff), the plan is the culmination of a one-and-a-half year effort that included community rides, a formal route selection and evaluation process, and two public open houses. 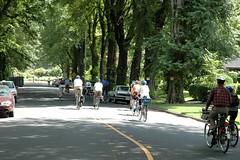 Proclaiming that, “Southwest Portland wants to be Platinum too,” SWTrails has released their latest list of “immediate actions” and recommendations for bikeway improvements in their part of the city.

SWTrails has worked with Southwest Portland residents and the City of Portland Office of Transportation for well over a year (we last heard from them back in November) to identify and map out a comprehensive list of improvements that they say will bring SW Portland up to par with other areas of Portland’s highly touted bike network. 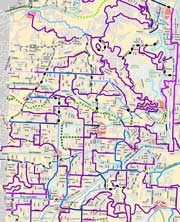 The latest map of proposed
bikeway recommendations
for Southwest Portland.
(Click to enlarge)

A group of bicycle advocates in Southwest Portland have unveiled their latest map of proposed bikeway improvements. The group, SWTrails, has been working for nearly a year to come up with recommendations that they plan to present to the Portland Office of Transportation (PDOT) for consideration in the ongoing update of the Bicycle Master Plan.

Central to SWTrails’ effort is the creation of a map that includes the types of bike facility improvements they would like to see. Back in March, I shared the first version of this map and I just received the latest version this morning. 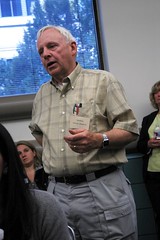 The serpentine, hilly, and narrow roads that make up most of southwest Portland are a far cry from the idyllic bike boulevards of inner southeast Portland.

But that hasn’t stopped a year-long effort by citizen activists and a group called SWTrails from working to create similar bike-friendly streets in their neighborhoods.

After months of planning, residents of southwest Portland, led by super-citizen trail advocate and Alice Award nominee Don Baack, have come up with a map of a new southwest bike network.

Baack, who leads the group Southwest Trails, has been working hard to garner neighborhood feedback and collaborate with PDOT to include these recommendations in the upcoming Bicycle Master Plan update.

Don Baack of SW Trails is spear-heading an effort to bring a more connected, safe and accessible bike route network to the hills of SW Portland.

He’ll lead a bike ride through SE Portland on Saturday (9/30) to take a closer look at that area’s successful network of low-traffic, bike-friendly streets known as bicycle boulevards (like Ankeny and Lincoln/Harrison).