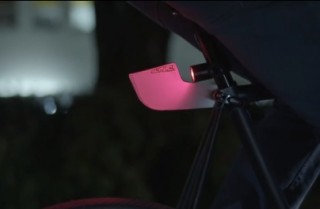 Here’s an interesting idea: A sheet of polypropolene that wraps around your rear light to make it more visible and less annoying at the same time.

How are rear bike lights annoying? Did you forget the huge debate and discussion we had back in July after we shared how someone spray-painted “F*** you and your epileptic bike lights.”

Now a London-based product designer hopes to solve that problem with his “Sombra” — a “lampshade” for your tail light. Sombra’s creator, Offer Canfi, was inspired to create the product after being passed by another rider during a nighttime ride in central London. “He had one of those blinking, bright-red taillights, and in the dark it played some nasty tricks on my eyes,” writes Canfi on the Indiegogo crowdfunding site he’s set up to fund the first run of Sombras.