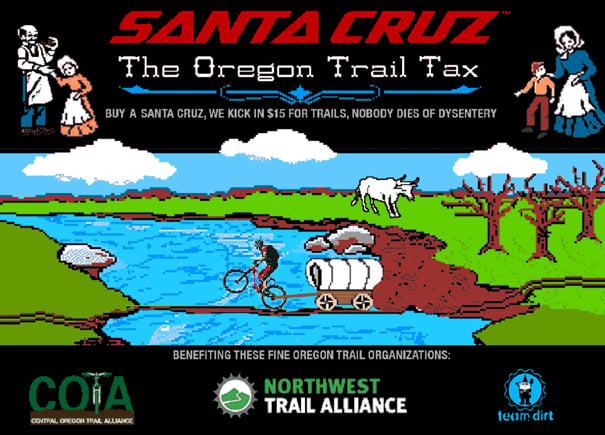 Some of you totally called this.

When news of Oregon’s silly new bike excise tax sunk in, some readers figured it was only a matter of time before a bike company or bike shop did a promotion around it.

SANTA CRUZ, CALIF. – Santa Cruz Bicycles has responded to Oregon’s controversial new bicycle tax with a promotion that promises to deliver thousands of dollars to mountain bike projects across the state. Dubbed “The Oregon Trail Tax,” Santa Cruz will match the $15 per bike tax customers pay on every Santa Cruz and Juliana bike sold in Oregon starting September 1 and for the remainder of 2017. Proceeds will be split evenly between three trail advocacy organizations who build trails in the state–the Northwest Trail Alliance (NWTA), the Central Oregon Trail Alliance (COTA), and Team Dirt.