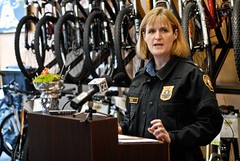 Last week, Portland Mayor Sam Adams made a surprising move by firing Police Chief Rosie Sizer and moving control of the bureau back into his office (and away from Commissioner Dan Saltzman).

There might be more to report on this in the weeks to come (will Adams relinquish the transportation bureau to make room for police?), but for now, with Sizer suddenly out of the picture, I thought I’d look back in the BikePortland archives to recall when and how she engaged with bike issues during her four-year tenure.