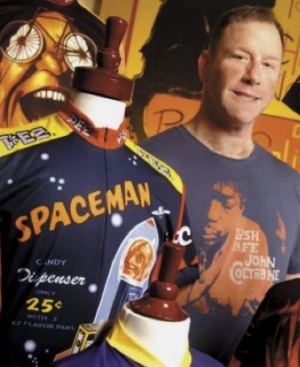 Roger Mallette died Sunday from unknown causes after a fall in his Portland office over the weekend.

Mallette, 48, was the founder of Retro Image Apparel/Micro Beer Jerseys, a company known for its expansive line of bike jerseys featuring licensed artwork including Star Trek, Dr. Seuss, The New Yorker magazine, the Lucky Lab Brew Pub, and many others. According to Mallette’s business partner Gene Luther, whom I spoke to on the phone this morning, a fellow tenant of the Olympic Mills Commerce Center found Mallette lying on the floor on his back near a shelf in his office on Sunday afternoon. First responders say he had been dead for 10-12 hours. The official cause of death is unknown, but Luther shared that he had a bump on his head and there were things that had fallen off the shelf near him. It’s likely he slipped and fell. He had been suffering from a serious bout of the flu (he took several days to call me back last week and said it was because he’d been in bed and was sick).

Mallette’s family flew into Portland from St. Louis to handle various matters and just left this morning. No date has been set for a local memorial service; but Mallette’s body will be flown back to St. Louis where he’ll be buried at veteran’s cemetery.