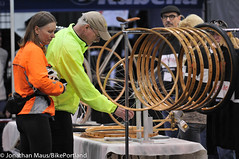 There’s always cool new stuff at the show;
now there will be cool used stuff too!
(Photo © J. Maus/BikePortland)

The PDX Bicycle Show is coming up on March 23-24 and the Bicycle Transportation Alliance has something big in store. They’re set to debut a new event dubbed BTA BikeSwap. The event, which they’ll publicly announce next week, is being billed as, “an opportunity for families, new cyclists and experienced riders to buy and sell their cycling gear.”

The BTA is partnering with the Community Cycling Center and the Bicycle Show’s organizers, Pedal Nation Events. The BikeSwap will be a benefit for both the BTA and the CCC. Is it just a bike swap meet? Not exactly. Check out what makes it unique: