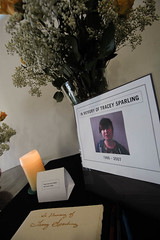 A memorial for Tracey
has been created in the
lobby of PNCA.
(Photo © Jonathan Maus)

According to the Multnomah County Medical Examiner’s Office, the victim in yesterday’s fatal collision in downtown Portland was Tracey Sparling.

Sparling was attending design school at Pacific Northwest College of Art (PNCA). She was 19 years old and was living in an apartment just a few blocks from where the collision occurred. (Her parents live in Salem, Oregon).

A few minutes ago, I spoke to the Dean of Students at PNCA, Michael Hall. He said Sparling was five weeks into her first term (after transferring from Syracuse University) and was majoring in Communications Design.