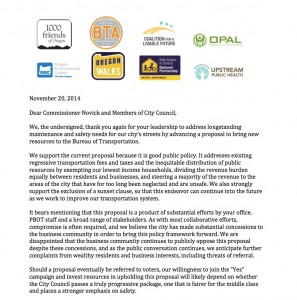 Portlanders have heard a lot from powerful voices opposing the City’s Our Streets Transportation Funding effort that looks to raise $46 million a year in transportation revenue via an income tax and fees on businesses. Now, a coalition of health, environmental, and transportation advocacy groups have released a letter in support of the plan.

The groups applaud City Council for creating what they call, “good public policy” that “addresses existing regressive transportation fees and taxes and the inequitable distribution of public resources by exempting our lowest income households, dividing the revenue burden equally between residents and businesses, and steering a majority of the revenue to the areas of the city that have for too long been neglected and are unsafe.”

Here’s more from the letter: 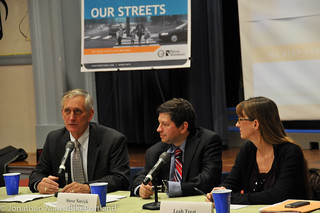 They’ve never said “Our Streets” is only for paving.
(Photo by J. Maus/BikePortland)

It’s one thing to be opposed to something on principle or policy grounds, but when the facts are twisted to suit an agenda, that’s something else entirely.

Unfortunately, that’s exactly what The Oregonian Editorial Board and the Portland Business Alliance have done. Both of these groups are staunchly opposed to the latest transportation revenue proposal unveiled by Mayor Charlie Hales and Commissioner Steve Novick earlier this week. I’m not entirely in love with the proposal (I think a paltry 7% of total spending toward biking-specific infrastructure isn’t enough); but that’s a different conversation. For now, there’s one aspect of the argument from the PBA and The Oregonian that really needs to be called out. 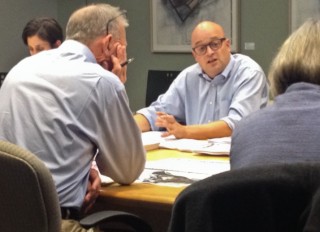 This morning in a conference room in the Portland Building, Bureau of Transportation staff laid out how they intend to spend $173.8 million in new revenue they hope to collect from residents and businesses in the first six years of the “Our Streets” funding plan.

While 42% of all the new revenue go toward paving (about $75 million), bike-specific investments are also on the list. A new carfree bridge over I-405 at NW Flanders Street and a protected bike lane on NE Broadway from 24th to the Broadway Bridge make up a list of about $7 million in projects that would dramatically improve biking conditions.

PBOT called this meeting to share an update on the funding plan to their various advisory committees. Among the 12 people in attendance at the meeting, six were city staff and the others were representatives from the City’s freight, bicycle, and pedestrian advisory committees. Members of the City’s Transportation Needs Funding Advisory Committee and Business Workgroup — both put together specifically to address the Our Streets plan — were also at the meeting.

The event was held at Sunnyside Environmental School
at SE 34th and Salmon.(Photos by J. Maus/BikePortland)

Last night was the coming out party for the City’s big new effort to raise new revenue for transportation. It was the first of three Town Hall events planned for this month where the Bureau of Transportation will make their funding pitch and ask for feedback from the public.

The night was anchored by a panel of Portland’s three most powerful transportation leaders: Mayor Charlie Hales, City Commissioner Steve Novick, and PBOT Director Leah Treat. Each of them shared a common sentiment throughout the night that echoed the “Our Streets” slogan being used to market the effort: If we want to solve the chronic shortfall in local transportation funding, we must step up to the plate and do it ourselves. Or put another way, it’s time for some new taxes to pay for our roads.