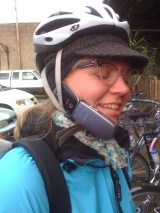 Since Oregon enacted their new cell phone law on January 1st, many people have asked me if it applies to people riding bicycles. My previous opinion was that it doesn’t, but a closer look at the law now has me less certain — and more confused.

The new law applies to people, “operating a motor vehicle while using a mobile communication device.” Since bicycles are not “motor vehicles,” I initially assumed this meant that bicycles would be exempt. But I don’t like to operate on assumptions, especially when it comes to bike laws, so I asked the office of State Representative Carolyn Tomei — the legislator who pushed the cell phone bill — for a clarification.