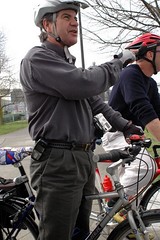 After a 22 year career with ODOT, Michael Ronkin is set to retire. Ronkin has been involved with ODOT’s bicycle and pedestrian programs since 1989 and is a nationally respected expert on designing streets for cyclists and pedestrians.

Co-workers and colleagues are planning a party at the end of the month to celebrate his career.

My first experience with Ronkin was almost a year ago when I posted about the infamous “wet paint incident.” Here’s the story: A couple on a tandem had slipped on the wet paint of a newly re-painted street. Concerned for the lack of signage and what they considered a safety hazard, they contacted ODOT but got the runaround.