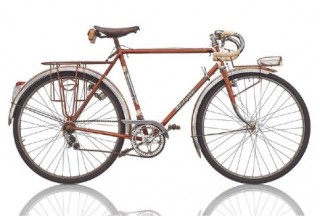 If you dreamed about owning one of the amazing bicycles from the Cyclepedia exhibition when it was at the Portland Art Museum in 2013, now is your chance.

Michael Embacher, the man behind the much-heralded Embacher Collection, has decided to part with his entire collection of 203 rare bicycles at an auction to be held in Vienna next month.

Embacher’s office emailed us with the news this morning along with a personal note from Embacher about why he decided to part ways with the bikes. It seems partly a matter of circumstance (he has lost the attic space the collection has be housed in) and partly philosophical. Here’s a snip from his note: