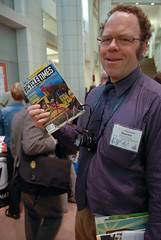 I ran into Dirt Rag magazine publisher Maurice Tierney a few minutes ago and was excited to see one of the first copies of his latest endeavor — Bicycle Times magazine.

I have a lot of respect for Tierney and have been a fan (and contributor a few times) of Dirt Rag for many years. Tierney and his team in Pittsburgh built Dirt Rag from a small, regionally-focused newsprint magazine into one of the industry’s most respected publications.

As its name suggests, Dirt Rag started out as a magazine and forum for mountain bikers. But over the years, Dirt Rag’s articles, product reviews, and how-tos began to cover a much wider scope that included advocacy issues and city/utility bikes. It was a natural progression, but it became clear to Tierney that he needed to launch a new title.