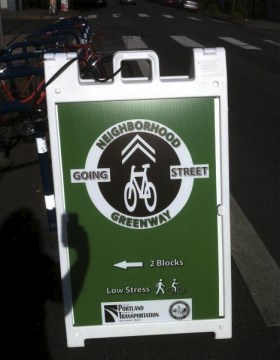 An interesting development in the main-street vs side-streets debate was brought to my attention by a reader this morning.

As part of a marketing campaign around their marquee bike boulevard, the Portland Bureau of Transportation (PBOT) has placed several signs on NE Alberta Street to encourage folks to ride on the Going Street neighborhood greenway.

The photo on the right was posted by Alberta Main Street on their Facebook page with the words: “Love this! Why risk riding your bike on Alberta Street when the low stress Going Street Neighborhood Greenway is just two blocks South of Alberta?”

The comments (and number of “Likes”) show that the campaign is a big hit. PBOT, through their Neighborhood Greenways Facebook page, left a comment too. Here’s what they said: