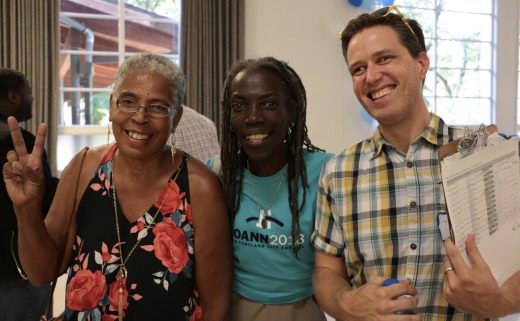 In the first national election since Donald Trump assumed the presidency — and despite gerrymandered districts, voter suppressions efforts, and racist campaigning by some Republicans — America tilted to the left last night. Here in the Portland region, the swing toward Democrats and progressive policies was even more pronounced.

In the race to replace longtime Portland City Commissioner Dan Saltzman, Jo Ann Hardesty cruised to an easy win over Loretta Smith. Hardesty becomes the first black woman to hold a council seat. Hardesty was endorsed by The Street Trust and nearly every transportation reformer in the BikePortland orbit was a major supporter.

Since their start in 1990, the local nonprofit advocacy group The Street Trust (formerly known as The Bicycle Transportation Alliance) was prohibited by law from endorsing candidates for elected office. That changed earlier this year when they announced the formation of a spin-off 501(c)4 entity known as the Street Trust Action Fund.