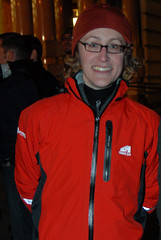 Hollie Teal, who organized
the rally that convinced Sam Adams
to stay on as Mayor, sat down with
him for a chat recently.
(Photos © J. Maus)

Without Hollie Teal, Sam Adams would no longer be Portland’s Mayor. At least, that’s what Adams told her during a lunch they recently had together.

Teal is the woman who organized the big rally in support of Sam Adams just as his chances at staying on the job looked grim (Adams was absent from City Hall and calls for his resignation were all over the media). Back in January, when the rally happened, I wondered if it signaled Adams’ political resurrection. Turns out, it did.

Teal — an everyday bike commuter who describes herself as a “cycling wonk” — served as catalyst for the rally and she also maintains the Sam is Still My Mayor blog. A few days ago, Adams called Teal to thank her for her support. Yesterday, the two met and Teal wrote about the meeting on her blog.