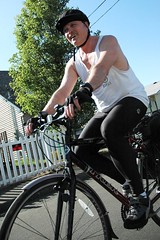 Commissioner Leonard on his ride
home from City Hall in
May 2007.
(Photo © J. Maus)

According to an article by Amy Ruiz in this week’s Portland Mercury, Commissioner Randy Leonard is “intrigued” by carfree public spaces — something he saw during a recent trip to Copenhagen.

Ruiz reports that during the question and answer session of a forum sponsored by the Oregon Environmental Council on October 1st, Leonard brought up carfree spaces in response to a question about congestion pricing.

“Joking that his answer was “going to get me in trouble,” Leonard made a bold announcement: After visiting Copenhagen earlier this year, he has been “quietly looking at those cities” that have created public spaces by eliminating auto traffic on certain streets. While it’s not a congestion toll, Leonard’s “intrigued” by cities that have “opened up parts of their city to just pedestrians… and [I] would like to actually look at doing something toward that end in the next four years.””