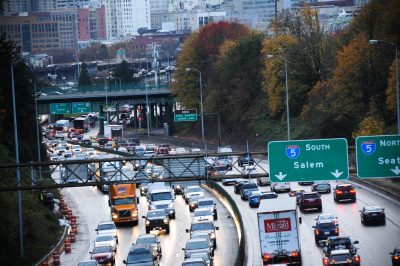 How can Oregon make progress in its fight against car abuse when cars represent one of the largest sectors of our state’s economy?

It feels good for Oregon bicycle advocates to talk about “bikenomics,” but the truth hurts: our state’s auto industry is a behemoth that casts a very long shadow. According to an article published Sunday in the Portland Tribune, there was $10.6 billion in new vehicle sales in 2016 (the latest year figures are available). That amounts to a whopping 17.9 percent of all retail sales statewide.

As the Trib story says, auto dealers are celebrating a “banner year” as they ready for their biggest moment — the annual Portland Auto Show held at the Oregon Convention Center this weekend.

Here’s more from the Trib piece:

After getting lots of negative feedback about an ad running on college campuses that said “Stop pedaling… start driving,” General Motors apologized and said they planned to stop the campaign. Apparently they’re still working on taking the ads down…

Reader Chris T. wrote us from the campus of Colorado University in Boulder with a picture of the ad running on a billboard in that school’s main sports stadium. See a photo of the ad and read Chris’s comments about it below…

“It was on a board on the interior wall of the south end of Balch Fieldhouse, which is a part of the CU football stadium containing bathrooms and concessions through which thousands of fans walk to get to their seats. It was just inside the doors on the s end, close to an entrance to the stadium.

Funny thing is Boulder has gotta be one of the most active and bike friendly campuses around, so Chevy is clearly out of touch.”

Last night I got a phone call from General Motors’ self-described “PR Guy” Tom Henderson (actual title is Manager, Cross Brand Communications and Media Relations). I had mentioned I wanted to talk with someone from GM about their “Stop pedaling… start driving” ad and Henderson was the guy who came forward.

Our conversation happened before Mark Degnan, Director of Local Advertising and Marketing for GM, posted a statement about the ad on the company’s “Fast Lane” blog (which has since been unanimously panned by commenters). 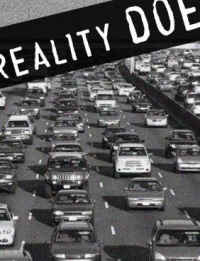 Detail of Giant Bicycles response
to GM ad.
-See it below-

It’s been two days since we first shared the “Stop pedaling… Start driving.” General Motors ad and the story — and the ad itself — is still getting a lot of attention. GM themselves has responded by saying they’ll pull the ad out of rotation, several people (and one bike company) have offered their own versions of the ad, the national and local media has taken an interest, and the story has spurred an interesting discussion about the state — and the style — of bike advocacy in America.

Not long after word of the ad spread, GM began apologizing profusely about it via their Twitter stream. They said the “didn’t mean to offend,” that it was created with the help of students, and that they were open to the feedback and working on changes. Then the Los Angeles reported that GM decided to pull the ad saying that, “We respect bikers and many of us here are cyclists.” 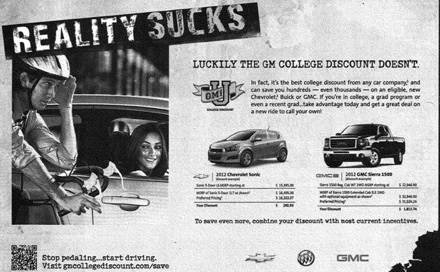 A massive lobbying effort spearheaded by General Motors, Ford, and Chrysler has resulted in passage of a $25 billion package of low-cost loans to help them re-tool for the “next generation of fuel-efficient motor vehicles”.

Automakers originally wanted $50 billion (twice what they got last go-round), and even then the plan was supported by both Barack Obama and John McCain. Lobbyists also said they needed the money because U.S. government policies that have hurt their bottom lines.