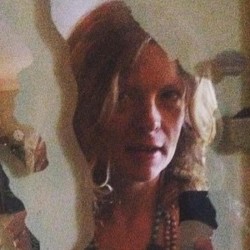 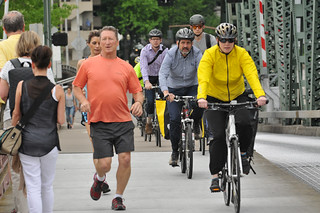 It’s not just Portland’s freeways that are crowded these days.
(Photo: J. Maus/BikePortland)

Please welcome back Sarah Gilbert. She’s written for us in the past about a cargo biking adventure and the psychology of anger.

Crystal was egged one day coming back from a bike tour, her guests trailing behind her on their bicycles. We don’t know why; just, bam, splat. The assailants only got her.

We’re both tour guides for the same company and I heard the story when I got back to the shop that afternoon. It’s busy work, with the tourist industry on the same upswing as everywhere-to-Portland immigration.
END_OF_DOCUMENT_TOKEN_TO_BE_REPLACED

Why are they so angry? (A guest essay) This essay was written by local writer and bike tour guide Sarah Gilbert. Her last piece for us was Two moms, two cargo bikes, one big adventure.

Why are they so angry?

This was my first question. I told my story from the day a woman in a Mercedes pulled out from a side street onto Holgate, turning right, when I was riding up the sidewalk with my oldest son on the back of my longtail. But I could have told you about the man in a sports car who swung around a group of us, narrowly skirting my mama bike, as we rode laughing in the middle of a beautiful spring morning east on Everett Street. I said something like “watch it!” and I too was angry but not so much as the pedestrian walking beside us. He told us it was the law to ride single file.
END_OF_DOCUMENT_TOKEN_TO_BE_REPLACED “The Portland’s been strained outta him.”

He’d followed, “They said you were loaded, but I thought they meant the other way.”

We were Portland, unfiltered, and they acknowledged this without meaning anything bad by it. Loaded like this: Emily with 220 pounds: speakers, bike and a five-gallon water container. Me with all our “soft stuff,” sleeping bags, pillows, extra dresses and sweaters, bread, peanut butter, a little backup boombox, that sort of thing. Music is so important to motivate us up the hills, it’s worth the extra pounds. We went through a weigh station on the way out of Portland, on Highway 30, and I registered 250, Emily 350. We each weigh 130. I kept asking Emily to let me take something else so I wouldn’t feel like a wuss; she kept saying “no.” END_OF_DOCUMENT_TOKEN_TO_BE_REPLACED